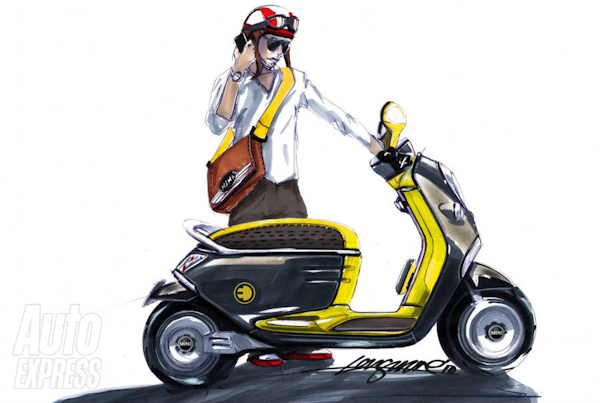 An iconic car company will be showcasing a 2-wheeler soon, which happens to be a scooter!

According to Auto Express, this British car company, known to us as Mini, will be showcasing an electric 2 wheeler at the Paris Motor Show this year. Called the Mini E Scooter concept, which as the name suggests, will be powered by an Electric motor located at the rear wheel. A Lithium ion battery stored under the seat of this scooter will power it.

Though we haven’t heard anything about this concept’s production chances but its just a matter of how many people like it and force the company to make one. And there are chances that people will love it.

It retains all the design elements that differentiate Mini from its rivals. There is a Mini-like large speedo, a Mini-like set of oval wing mirrors and Mini-like squared rear lights. Bits of chrome and the use of the same paint scheme(grey and luminous green) as the Mini E make sure that people dont mistake it for something else.

There is a similar scooter made by Smart waiting to be unvieled at the same time(and at the same venue) too. Which of the two will be Smart-er?

Only time will tell, and obviously the Paris Motor Show.

Watch this space for more updates and don’t forget to have a look at the Mini E Scooter Concept and Smart’s version too in the gallery below.

Thanks AutoExpress and WorldCarFans for the pics.