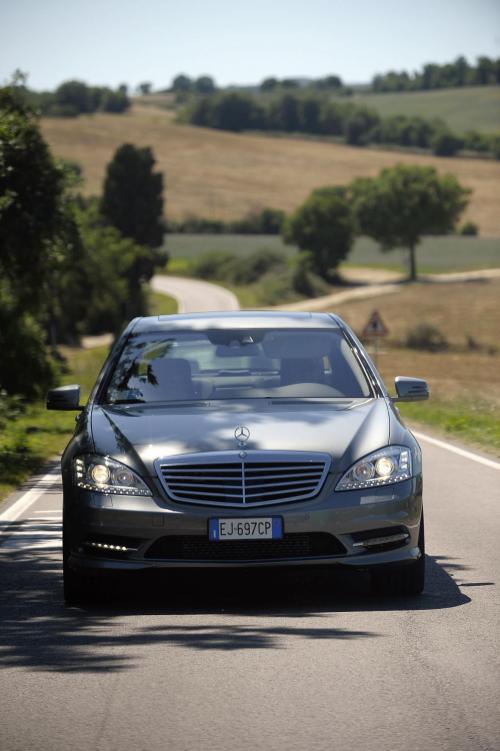 Mercedes S-Class, also known as the world’s best car, has of late been facing some real tough competitions from the products offered by compatriots Audi and BMW. Mercedes is quietly working on the new generation S-class as the current gen model is already more than6 years old.

For now, though, Mercedes has modestly launched the Grand Edition of the flagship S-Class in Italy. What sets this edition apart from the standard model is the AMG body kit, LED Daytime lights and those jaw dropping 19-inch alloys. Step inside and you will find the interiors more luxurious than ever with designer black ash trim, stainless steel pedals and unique floor mats.

The queen of the exclusive Mercedes-Benz AMG style

Mercedes-Benz is celebrating 125 years of the automobile and 60 years of presenting a new S-Class and exclusive version of the flagship of the Star: S-Class Grand Edition. With approximately 6,300 cars were delivered only in Italy and almost 385,000 worldwide since market launch in the fall of 2005, the current generation S-Class luxury sedan is the world’s best selling, as well as confirming a strategic model in the range of Mercedes-Benz. The new S-Class Grand Edition adds to and Elegance versions Avatgarde, enriching its offer with an original version that is distinguished by its attractive sporty AMG, the high-performance brand of Mercedes-Benz Cars.

Innovative, comfortable, safe and now even more attractive: these are the values ??that make today more than ever, the S-Class sedan in the luxury class world’s most trusted, real benchmark in automotive development. Since 1951, the year of birth of the Type 220, the direct ancestor of the S-Class, Mercedes-Benz has sold nearly three and a half million cars of that model. In Italy, about 6,300 units were registered in six years after its debut last generation.

Thanks to the interventions by the AMG PERFORMANCE STUDIO developed, S-Class Grand Edition acquires an even more dynamic. The design of the front spoiler underlines the imposing presence of the S-Class accentuate the visual impact in the front view, where the car stands for the air intake that extends to the base. The side skirts continue the design of the front bumper and serve, with their clean lines, as an umbrella with the rear apron, while the incisive rear bumper with black insert closes the rear of the car smoothly.

The AMG light-alloy wheels with five double-spoke 19 “accentuate the sporting character of the car. Thanks also to the front and 255/40 tires 275/40 at the rear, alloy wheels fit perfectly in the wheel arches and give the S-Class an extremely dynamic, as well as ensure a further increase in handling. The sporty look is completed then the front brake calipers, painted in silver with the Mercedes-Benz. For the six-cylinder models personalization AMG also provides cross-drilled brake discs on the front of the eight-cylinder versions with a diameter of 350 mm (standard 335 mm).

The interior features a leather steering wheel and wood trim and black ash, in addition to the stainless-steel sports pedals with rubber studs brushed black. In line with its own personality and the role of technology trendsetter, the S-Class is the benchmark in terms of on-board infotainment systems. The Grand Edition version offers, in fact, the multimedia system COMAND APS WCF navigation system has a particularly fast in the European calculate routes. To make it even more comfortable use of the navigation also contributes a detailed three-dimensional mapping. The free update map data for 3 years, the Music Register, the LINGUATRONIC voice control device, and the Speed ??Limit Assist are just some of the features included as standard in this system.

S-Class Grand Edition is equipped (with the exception of S Biturbo 250 CDI) with the Parking pack that sees the interaction of the system with rear camera parking assist. Even the front LED daytime running lights are standard, along with the Intelligent Light System and the system adaptive headlights.

The base of the lighting system consists of powerful bi-xenon headlamps with variable adjustment connected to electronic control. From these stations acquire data on the headlights to the driving situation and can therefore adjust the light distribution. Instead of the beam, the system uses the mode “roads” that offers a better and wider illumination of the road on the edge of the driver’s side. In dark the driver has better visibility and can react more rapidly when other road users crossing the roadway.

From a speed of 90 km / h mode is automatically activated “highway” which increases the driver’s view up to 60%. This lighting function is activated in two stages: the initial phase of the Intelligent Light System brings the power of the xenon lamps 35 to 38 watts, thereby increasing the intensity of the beam and above all improving the illumination of the roadway and its edges. From 110 km / h is available on the second level. At this stage the bi-xenon module on the driver’s side is slightly raised. The visibility on the highway is about 120 m at the center of the light cone the driver has available a visibility of about 50 m higher than that of conventional low beam.

By the way, “fog” expanded, Mercedes-Benz has enhanced the guidance of the motorist in conditions of poor visibility. This new function is below 70 km / h when the fog is on. The Intelligent Light System technology allows you to turn out up to eight degrees bi-xenon headlight on the driver’s side and at the same time, lowering the cone of light. In this way the inner half of the roadway is illuminated better and reduces the glare of light reflected by the fog.

The active assistance to the turn lights are two other features Intelligent Light System that are activated automatically. Depending on the steering angle, yaw angle and speed of travel, active headlights rotate very rapidly as 15 degrees horizontally, dramatically improving the illumination of the roadway. This function is active with both the low beam headlights with that.

The cornering light function increases the safety at
intersections and road entrances or in tight corners. It is activated automatically as soon as, at speeds below 40 km / h, the driver activates a turn signal or steer. The light projectors illuminate a range of about 30 m the lateral area before the car at an angle of 65 degrees.

Adaptive Highbeam Assist: maximum illumination of the roadway
in every situation

LED lighting package in the Mercedes-Benz has combined the Intelligent Light System care system adaptive headlights. The latter recognizes the vehicles coming from the opposite direction illuminated or prior to the car and turn off the headlights. In addition, regulates the flow of the beam to ensure maximum visibility to the driver can not dazzle road users to proceed in the opposite direction. So the driver can better recognize the road configuration and the presence of pedestrians or danger spots and is able to react further in advance.
When the system detects the presence of vehicles in the same lane or the opposite, constantly corrects the set of lights so that the cone of light that does not invest in other vehicles. The adaptive headlights care system also takes into account, the steering angle to avoid dazzling other road users in tight corners. When the road is clear, the system switches on the headlights in smooth progress.

The engine line S-Class Grand Edition, includes two diesel and two petrol. Among the outstanding novelty of the diesel 4-cylinder Biturbo S 250 CDI 150 kW / 204 hp, which gives primacy to the Class D efficiency in the segment, with a combined fuel consumption of just 5.7 l/100 km. The V6 diesel S 350 BlueTEC with 2,987 cm3 of displacement, produces an output of 190 kW / 258 hp and 620 Nm of torque, ensuring excellent value in terms of fuel consumption and emissions. With BlueTEC technology with AdBlue additive for the purification of exhaust gases, the S-Class diesel cars is among the most ‘clean’ in the world today and have met the prescribed emission limit values ??for 2014 by Euro 6. The combined use of the S 350 BlueTec is less than 0.6 liters compared to the previous model, while CO2 emissions drop from 177 to 164 grams per kilometer.

The main features of the S-Class Grand Edition: