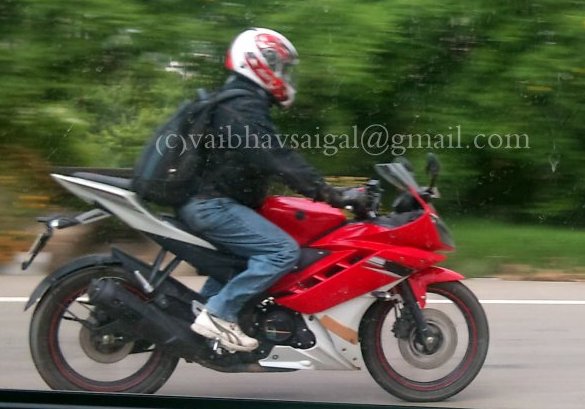 So for how many months can a company keep testing a new bike, holding back its launch? No really. We have talked about the new, face lifted R15 so many times now, the whole topic is bordering onto boring. In fact we have our doubts whether these are soon to be launched machines or just some mod jobs. Come one Yamaha, what is it exactly that you are waiting for?

Now since we have this new spy pictures, we will, allow us once again to talk about what all to expect from the new bike – something we have discussed like a few hundred times already. This new version of the Yamaha R15 has been in the news for far too long now. The bike has been caught testing, as well as in production ready avatars quite a few times. Yamaha India, however, have still not said anything officially about the new version and the company maintains a mysterious mum whenever poked about the new version of the bike.

An earlier spy picture of the bike

In its latest iteration, the R15 will get more aggressive looks and shun some of its sobered-down-for-India styling bits. The most important and visible change is the replacement of the single seat with a twin, step seat. Practicality has been sacrificed here for snazzier looks. New styling bits also include a sharper tail-end, new 10 spoke alloy wheels, changes to the fairing, headlight and the exhaust can. Yamaha R15’s skinny rear tyre which was optimized for superior acceleration and less rolling resistance, has been replaced by wider rubber. The rear end of the new Yamaha R15, as a result looks decidedly better than the rather disproportionate and lame looking behind of the current gen bike. The graphics on the bike are also new. There was some buzz on Yamaha having decided to reduce the price of the bike as well with the new model. However, as we mentioned earlier, no official word on Yamaha on this either.

No major changes are expected in the mechanicals or ratings of the bike. Have a look at the spy picture, which happens to be the clearest yet of the new machine. Do let us know what you think of the new design.