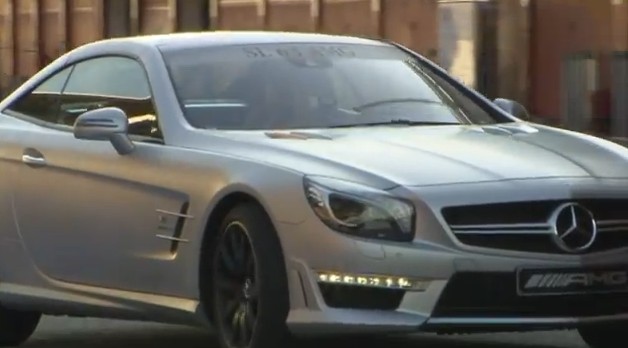 Mercedes Benz unveiled two of its brand new cars today at the Barcelona circuit in Spain today. The brand new SL63 AMG was unveiled to European media today. The AMG version comes two months after the advent of the 2013 SL-Class. M-B also unveiled its F1 car for the 2012 season, the W03.

In its latest avatar, the new SL63 AMG is powered by the recognizable 5.5 liter V8 twin turbo which now dishes out 536PS of power and is able to propel the roadster from 0 to 100kmph in 4.3 seconds flat. Addition of the AMG performance pack would reduce that time by 0.1 second. The new SL63 AMG is more than 100 kg lighter thanks to its all-aluminium body. The foldable tin top now retracts in 20 seconds. The tailpipe emissions have gone down, and the fuel efficiency is claimed to have gone up by 30 percent. Quite a tall claim, that.

Visually the new AMG is differentiated with its usual SL cousin with a new body kit. The front bumper has larger air intakes, headlamps have daytime running lights which are exclusive to the AMG version, there is a special grille and finally there is the more blatant V8 Biturbo badging on the flanks. Wider sills, rear diffuser and four exhaust pipes are some other giveaways.

Official images and details about the new car will be released tomorrow. In the meantime, have a look at this official video where the car makes a brief appearance. And of course, rely on us to bring you the official images and details of the car as it is revealed tomorrow. You can have a look at the images of the 2013 SL-class in the meantime, in the gallery below.