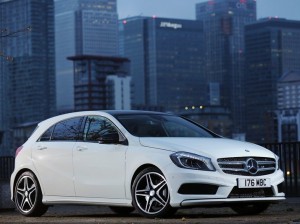 It is a pretty well known fact that Mercedes India, the Indian subsidiary of the popular German premium car maker, will officially launch the A Class premium hatchback in Indian market this year.

It has now emerged that Mercedes India might launch the A Class in the fast developing Indian car market as soon as in May 2013. The source of this rumour is a tweet by Siddharth Vinayak Patankar, who is the host of NDTV 24×7’s Car & Bike Show. It is also being said that unlike the B Class, which was launched in India in only the petrol engine variant, the upcoming A Class will come to us in both petrol and diesel guises. Both the engines will be mated to automatic transmissions.

The car will be launched at a price that will be undercut by that of many D segment sedans. The car will battle it out against the upcoming 1 Series of cars from BMW and might even lock horns with the Audi A3 hatchback, if and when Audi India decides to bring it here.