Royal Enfields were never designed or marketed as cruisers. Just because they were fitted with a long-stroke, large-capacity single which sounded really unique, people started to draw parallels between these war-era styled British machines and Harley-Davidsons.

As a result, many REs began entering chop shops, dressed as simpletons, and a few days later, came out transformed into something longer, more laidback and fancier than they originally were. Featured here is a Royal Enfield which is now called ‘Tatavamasi’ and the folks behind this build are one of our favourites – Bulleteer Customs. 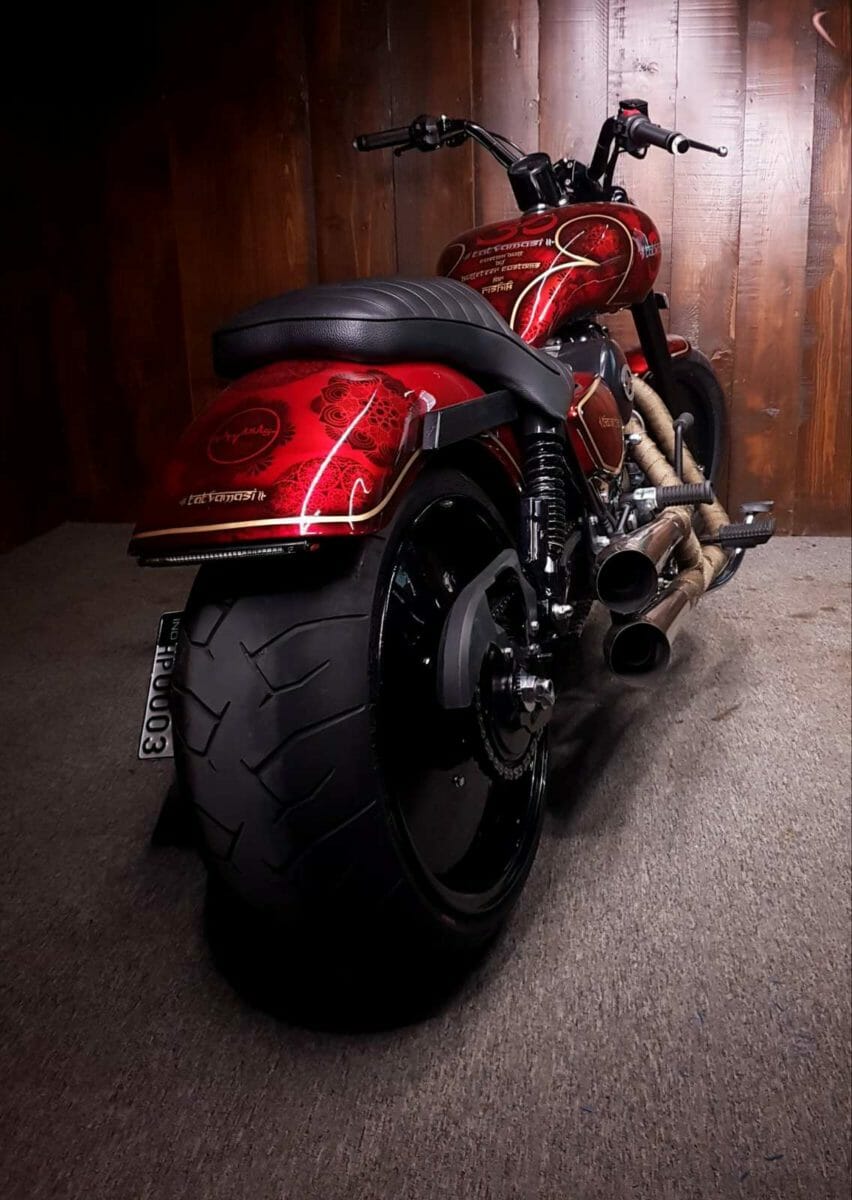 The first thing that strikes your vision is the size of this thing and once you are over it, the red paint job and the gold-finished detailing on the panels take over. Once you are done with that, notice how the wheels resemble vinyl records which have been pinned by the front forks and the rear springs. Must be some rhythmic inspiration which led them to this because if this motorcycle was a musical instrument, those twin pipes do look like an outlet for the tunes to come out.

You’d be wise to think that one of those pipes is a faux unit. However, look closely and you’d notice that the actual exhaust pipe merges with the secondary trumpet, for sound to emanate from both. Quite ingenious we’d say. What also adds a lot of character to the proportions of this build is a massive, low-profile rear tyre, side-mounted rear licence plate, a pulled-back and tall handlebar and an overall stance which is stretched and low. All you Royal Enfield fans, if you like what you see, Bulleteer Customs is on Facebook and Instagram. You may drop a message if you’d like a machine which looks like this or like many of their past builds which you can gawk at on their page.

Also Read: Can The Royal Enfield 650cc Motor Withstand Abuse If It Ever Powers A Himalayan? (Video)

If you’ve been wondering what’s happening with Royal Enfield as a brand and all the motorcycle which were spied testing earlier this year? The pandemic is perhaps the reason for the delay in the introduction of these machines. However, we expect things to begin with what looks like an updated version of the Thunderbird X, but could be called the Meteor. Along with that new name, the bike should also introduce RE’s brand new single-cylinder motor and features we’ve never seen before on any of their motorcycles.