British driver Lewis Hamilton’s Mclaren made it to the pole in the qualifying season’s first F1 race. Jenson Button’s Mclaren was the second fastest on the track. Arch rival Ferrari’s driver’s Fernando Alonso and Felipe Massa however, could not make it to the final qualifying session.

Following the Mclaren cars was Romain Grosjean in the Lotus Renault. Mark Webber in a Red bull Renault was the fourth fastest. Schumacher ended at fifth whereas Sebastian Vettel in another Red Bull Renault was the sixth fastest. Schumacher’s team mate Nico Rosberg will start at seventh place tomorrow. Force India’s car in the hands of Nico Hulkenberg bagged 9th place. However, we Indians will be disappointed as Narain Karthikeyan’s HRT F1 car was seen struggling to match the pace of others and the driver qualified for the last place on grid. 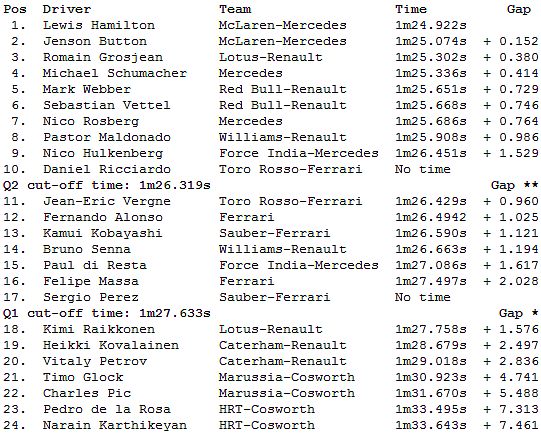