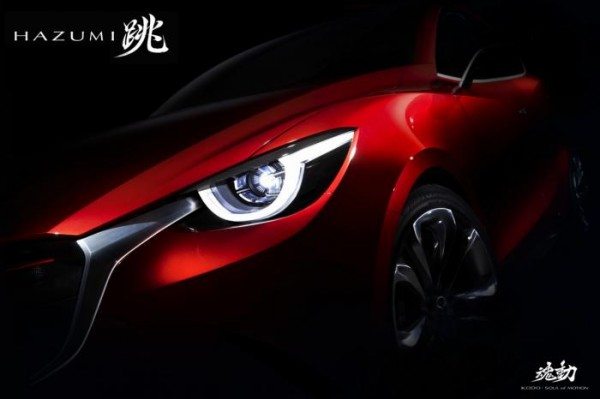 Japanese auto maker Mazda recently released this teaser photo of the upcoming next-gen Mazda2 by providing a sneak peek at its Hazumi concept, which will make its public debut at the fast approaching Geneva Motor Show 2014.

“Hazumi” translates to “spring up” or “bound” in Japanese and the upcoming concept is likely to give us the first glimpse at Mazda’s  soon to be launched upcoming sub conpact car. This car is likely to be relerased towards the end of this year. Going by this teaser image we have here, Mazda seems to have lifted styling cues from the Mazda3 and Mazda6. However, as must be obvious, these design elements have been downsized to suit the lesser dimensions of the Hazumi concept.

Talking about the production model this concept will spawn, the upcoming Mazda2 is likely to be targetted at the female audience and the could be underpinned by a shortened version of the CX-5’s platform. The car is expected to offer roomier interior than the outgoing model and might even spawn a crossover model soon after its launch.

Mazda also plans to showcase its new SKYACTIV-D 1.5 clean diesel engine, which is likely to power the Mazda2 and other small cars in the car maker’s product portfolio.