Maruti is having a tough time keeping it’s upcoming YRA/Fronx hatchback under wraps. These latest set of spy images come courtesy of Team-BHP, and shows the next offering from Maruti from the inside, as well from the outside.

Note : Although these images show the Euro-spec, LHD (Left Hand Drive) model lined up for exports, it gives a fair idea of what to expect from Maruti’s all-new premium hatchback, to be positioned above the Swift.

The YRA’s appearance will be that of a watered down Suzuki iK-2 Concept, which made its debut at the 2015 Geneva Motor Show in March. 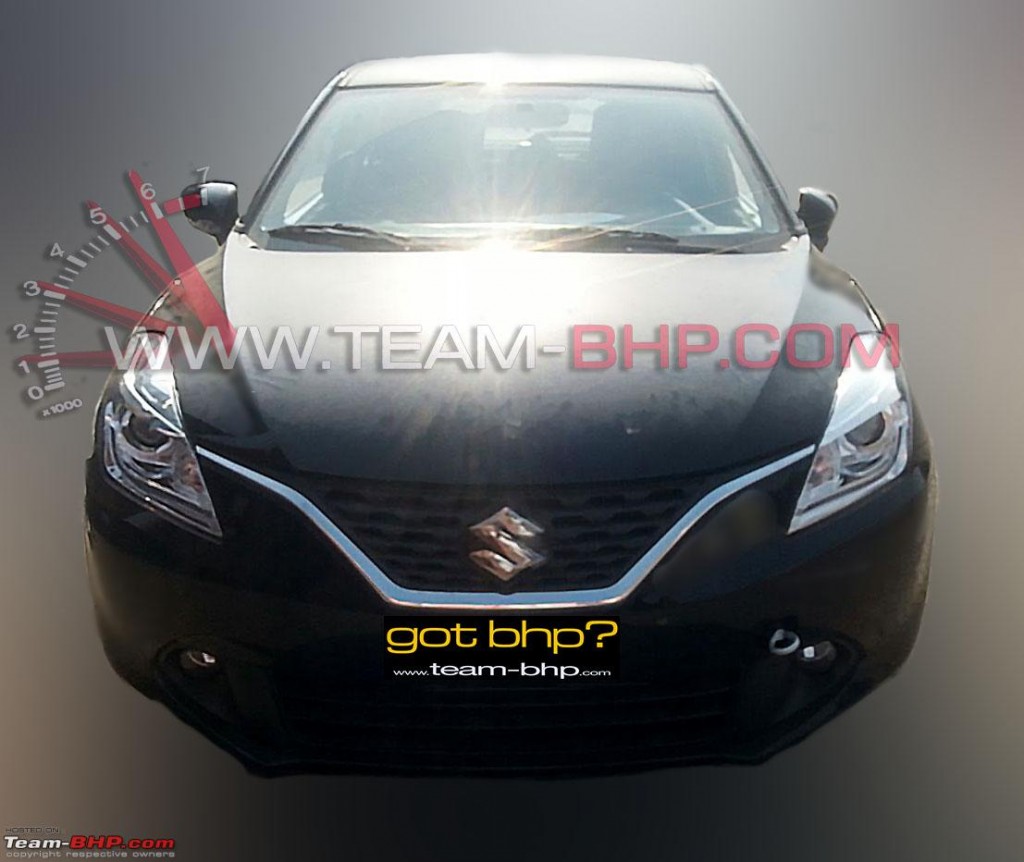 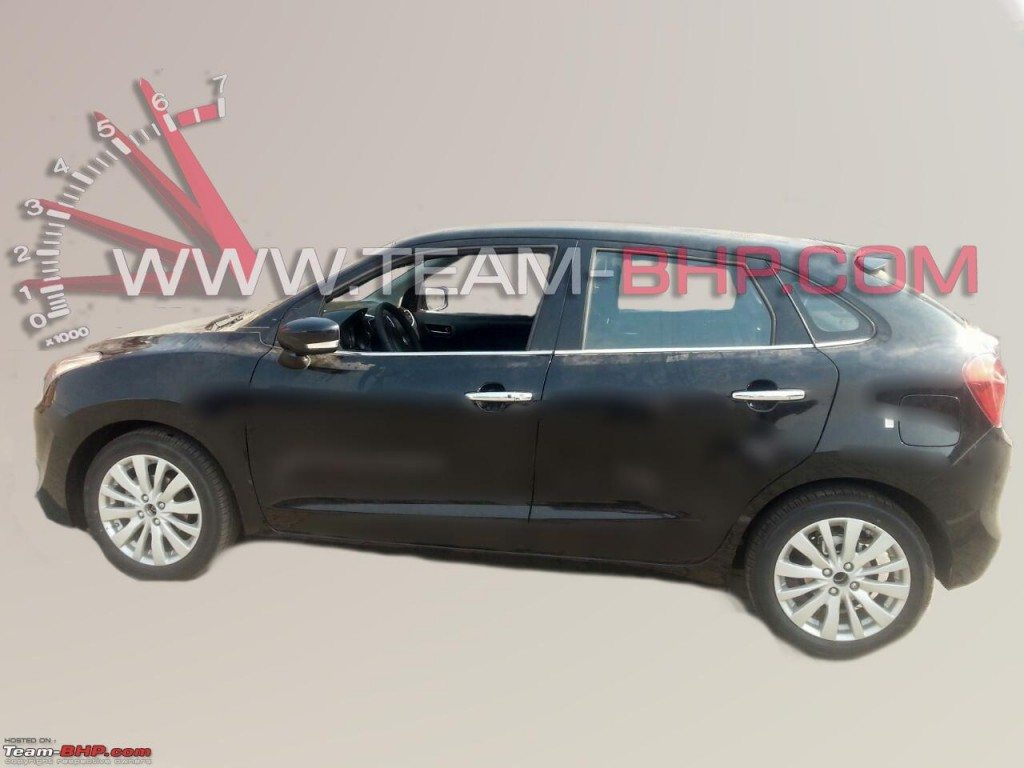 A flowing waistline rises and meets a mildly swooping roof-line, while mildly flared wheel arches accentuate the volume. Chrome licked door handles and a chrome strip runs across the base of the window line up the premium ante. Door mounted ORVMs with integrated turn indicators, blacked out A-pillars and 16 inch, 12-spoke alloy wheels round the sides off. 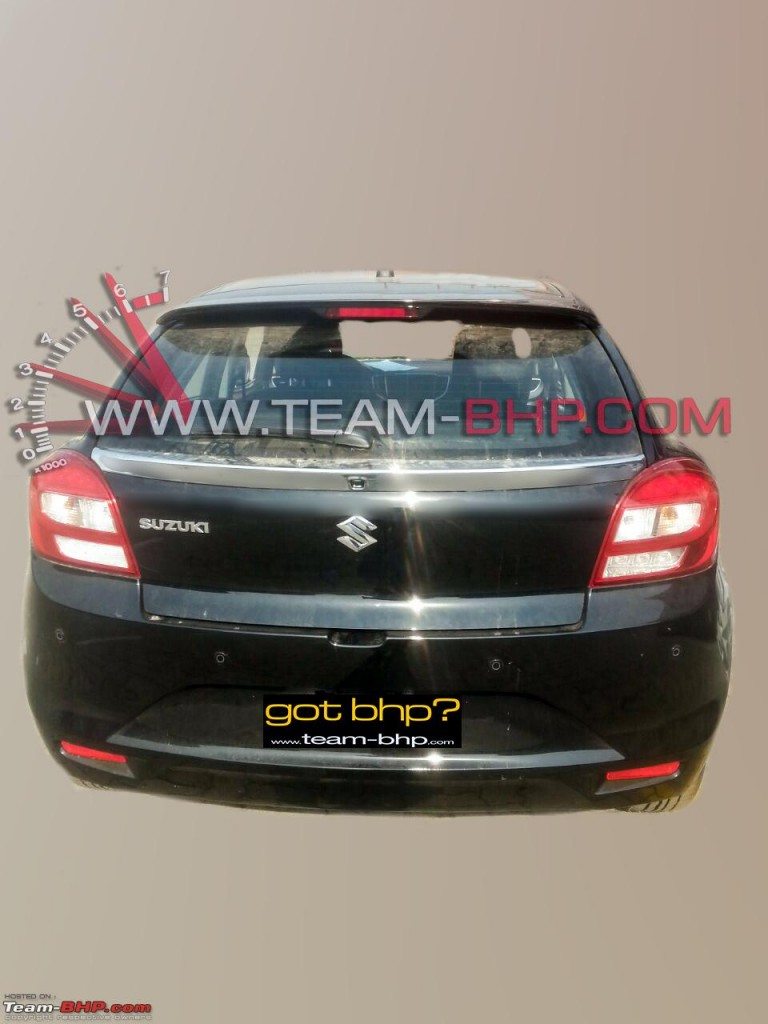 The YRA’s rear end throws up a rather compact tail gate and a sharply raked rear screen. Glass and metal areas are separated with a chrome strip running across, which also bears a reversing camera in its midst. The tail lamps combine LED elements and conventional illumination.  There is also a roof mounted spoiler and a stubby antenna. 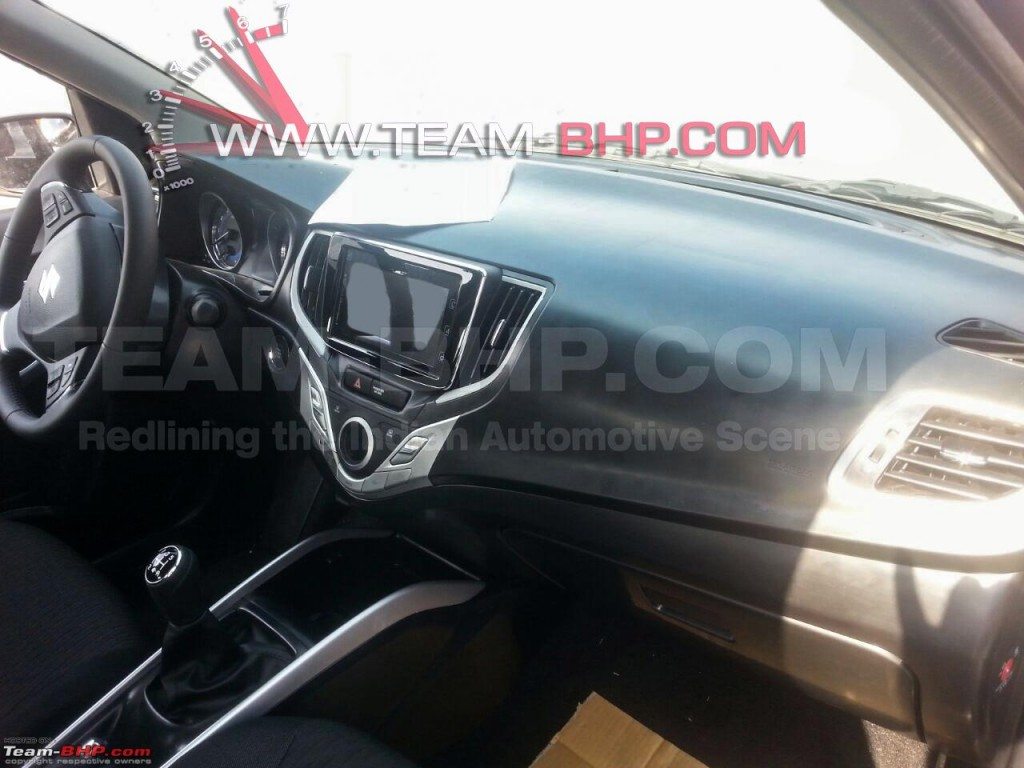 The interiors feature an all black theme, with brushed silver finished accents in and around the centre console, apart from the transmission tunnel and door pads. The overall dashboard design is quite contemporary, and highlights Suzuki’s “Liquid Flow” design philosophy. 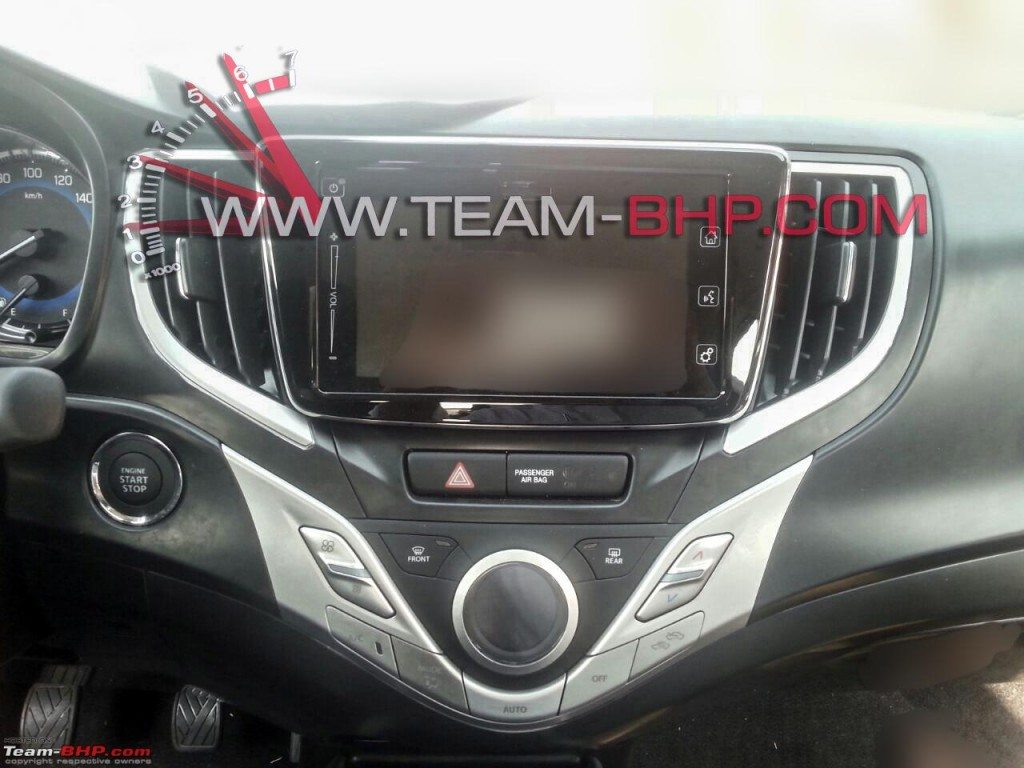 Peek-a-boo : The YRA’s insides get a push button engine start feature, a 7-inch touch-screen infotainment system (Maruti SMARTPLAY), similar to that on the S-Cross and the Ciaz, automatic climate control, key-less entry and dual air-bags. 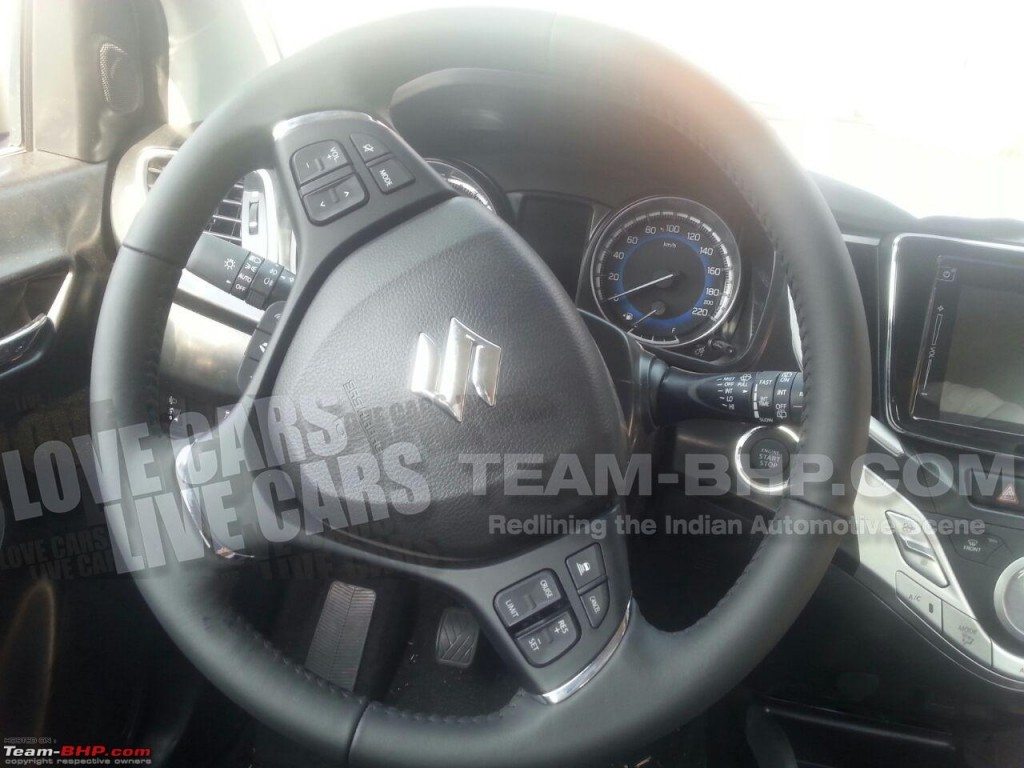 Multi-function steering wheel is borrowed from the S-Cross as well, and features cruise control settings, apart from audio and telephony functions. 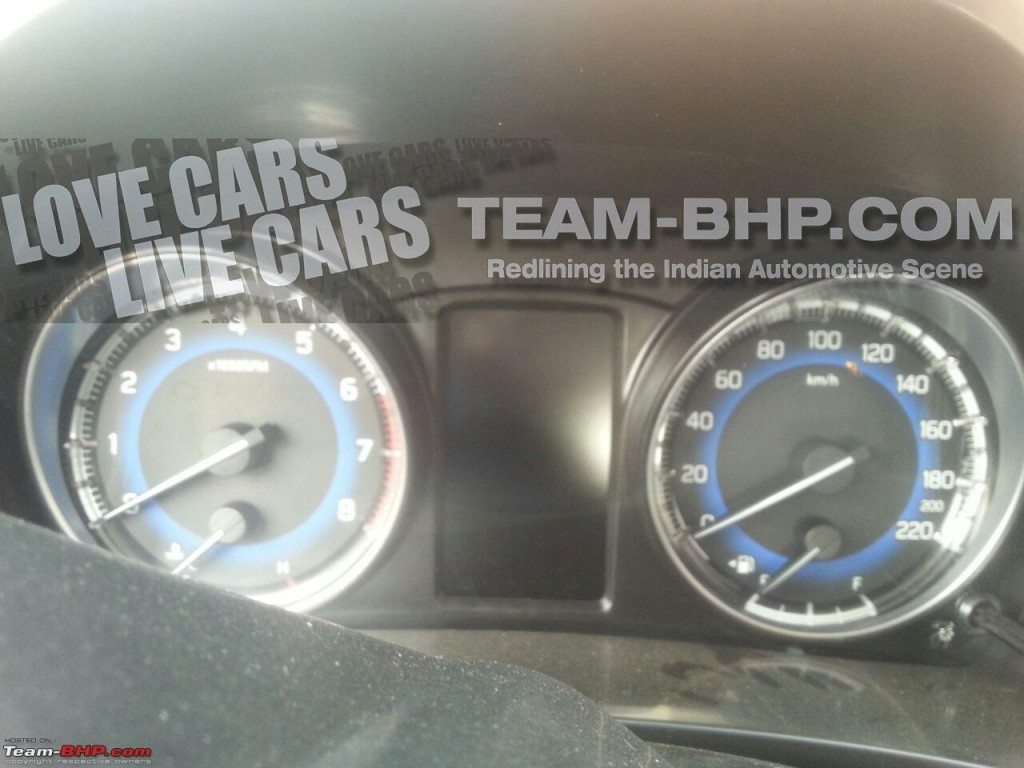 S-Cross derived instrument cluster feature blue hues and a Multi Information Display nestled between the pods, which throws up a variety of information like distance to empty figure, outside temperature etc. 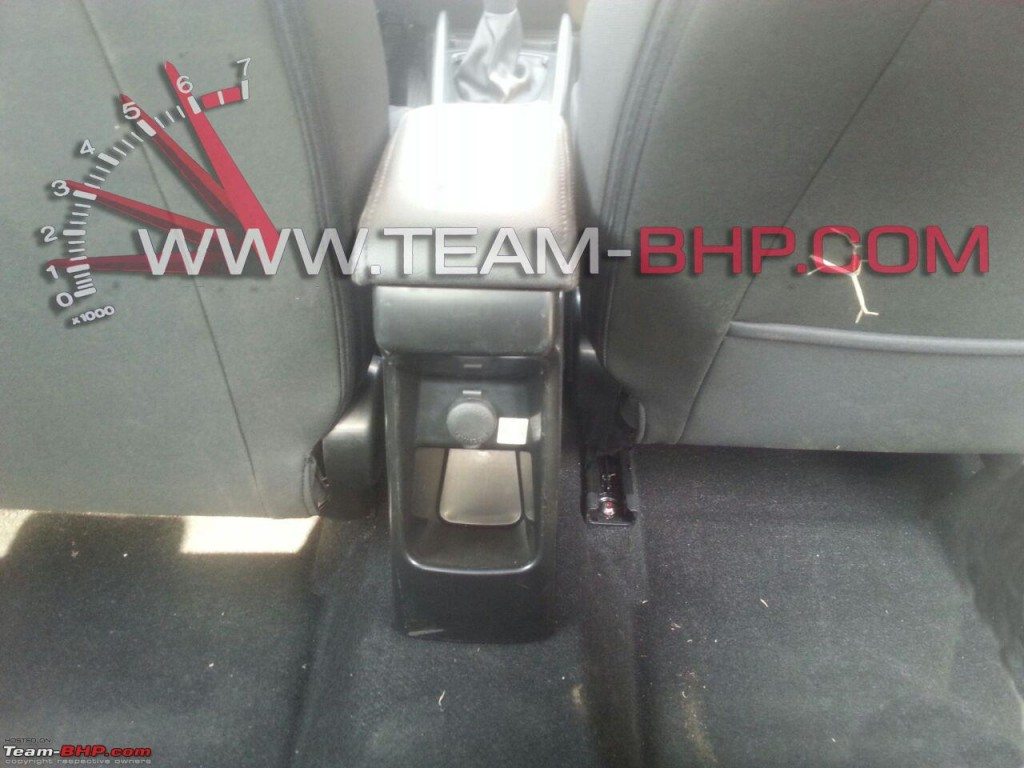 No A/C vents for the second row; a 12 V charging port is all that is offered. 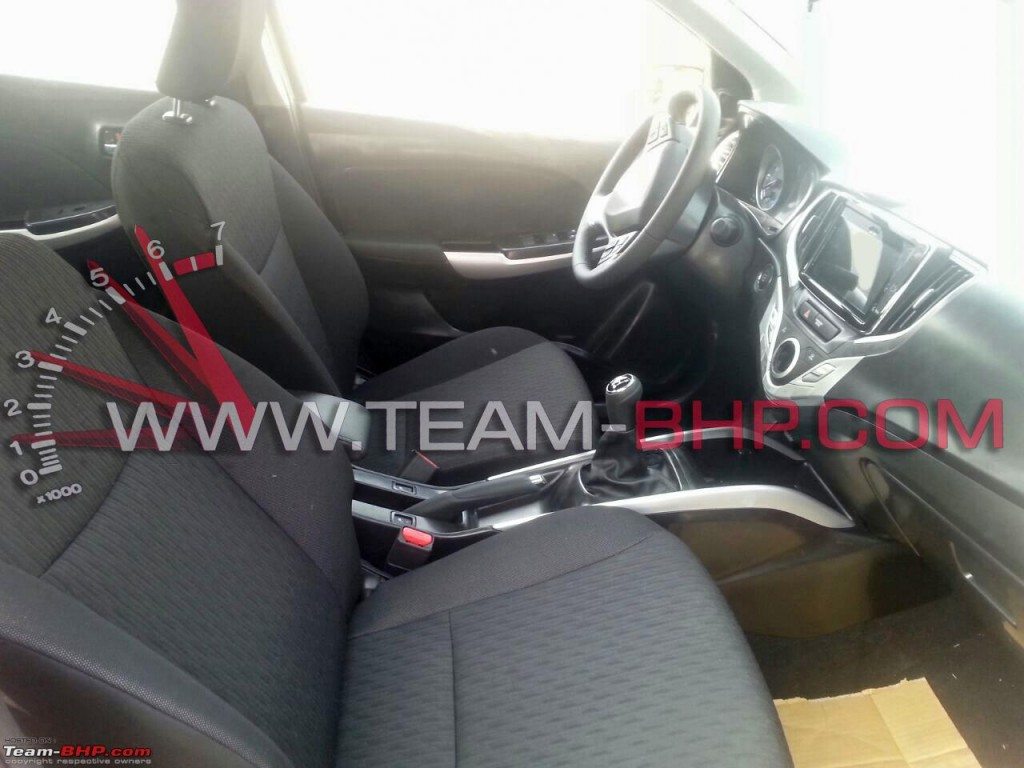 Fabric trimmed front and back seats (below) look accommodating enough; with the rear bench getting individual seat belt mounts for three occupants and a 60:40 split. 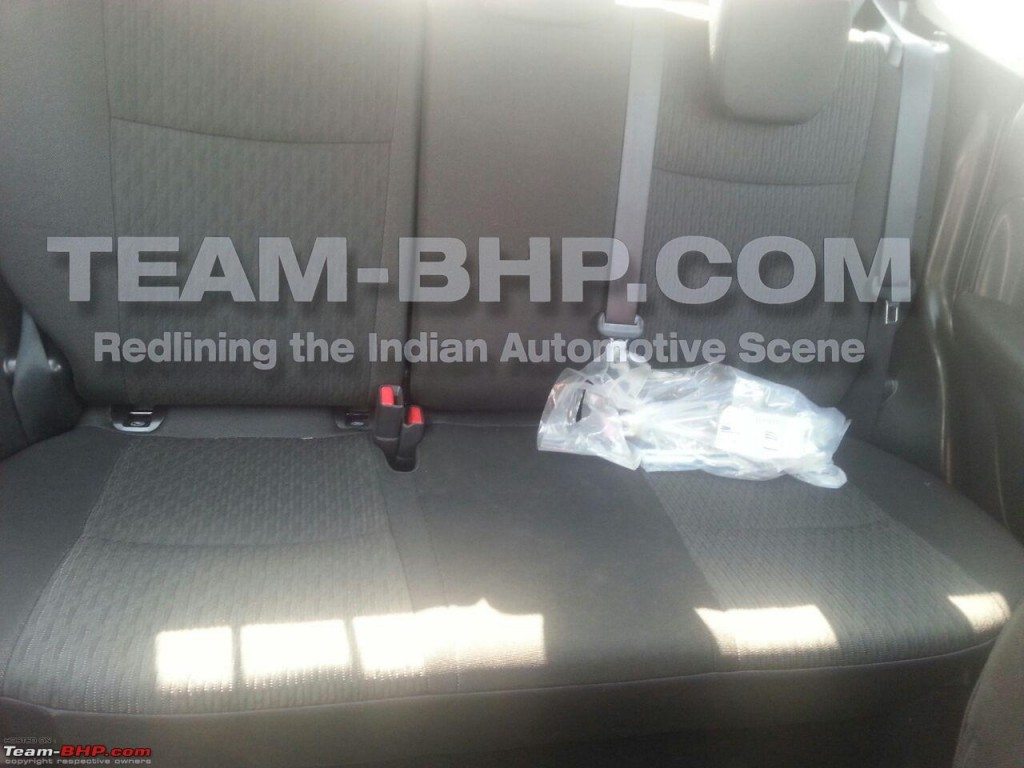 Powering the YRA will be a new 1 liter Boosterjet, turbocharged petrol engine (K10C), which is expected to deliver upwards of 23 Kmpl, while the 1.3 liter DDiS diesel unit is also expected alongside.

The YRA premium hatchback will be sold through Maruti’s new premium Nexa dealerships, and the auto-maker is currently allocating these new showrooms in Tier II markets.