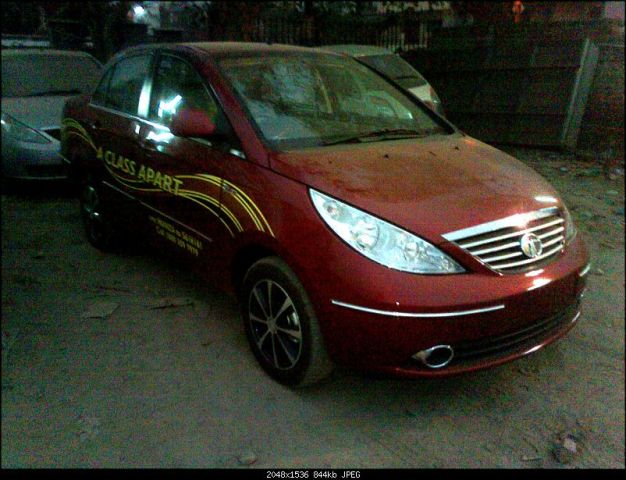 As we reported a few days earlier, Tata Motors are planning a face lifted version of the Manza, with the name Manza Elan. The company will most likely be launching the car on February 9th 2011. The pictures of the face lifted version have been doing the rounds on the internet for some time now. Although the basic proportions or mechanicals of the Manza have not been altered, Tata have added a lot of chrome on the body of the Manza. Among the body parts that have received the additional chrome treatment are front fog lamp surrounds, rear bumper and the area above the rear number plate.

The alloy wheels are standard on the Elan, and these are the same alloys that you witness on the Vista 90.
The Elan also witnesses alterations made to the Manza’s interiors. The door trim is different, along with some minor changes being made to the dashboard. A new Tata badged plate as been put on the insides of the door sills. The two-tone interior of the car is now done up in a brownish purple and beige colours. Some of the plastics too have been reported to have been improved, along with a better fabric for upholstery.
Engine options remain the same, with no changes in terms of performance of efficiency. The Elan will most likely replace the Aura Plus variant of the Indigo Manza.