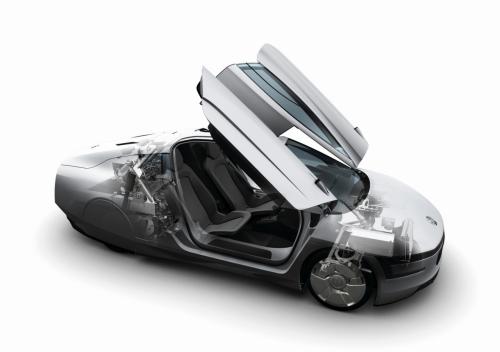 What you are looking at is Volkswagen Formula XL1, the car which is capable of going more than 111 km on a litre of diesel. Apart from the high fuel efficiency the XL1 also boasts a ridiculously low CO2 emission figure of 24 g/km.

The XL1 is a diesel electric hybrid, with a 800cc two-cylinder TDI engine producing 48PS, supported by a 27PS (20KW) lithium-ion electric motor. And just because the XL1 is fuel efficient, you shouldn’t think that it’s a slouch. The 0-100km/h sprint comes in a decent 11.9 seconds, and the top speed is a respectable (and electronically limited) 160km/h. The XL1 is also capable of travelling up to 35km solely on electric power.

The secret behind the XL1’s fuel sipping capabilities is its lightweight construction. The car’s chassis is a carbon fibre monocoque, while the body panels are made of carbon fiber reinforced polymer (CFRP).  The result of using such ultra-lightweight materials is a weight of just 795 kg.

The car will apparently make it to production, though only 100 units will be created and sold. The XL1 will be sold in markets across the world, starting from Europe, and then going to the US and China.

And if you thought that such exclusivity and environment efficiency would make the XL1 cost the sun and the moon and all the constellations, you’d be wrong. According to senior VW management, the car won’t be as expensive to produce as some other such projects in the past, as the hybrid tech is getting increasingly mainstream. Also, the cost of lightweight materials such as carbon fiber is coming down, as the usage increases in automotive and aviation applications.