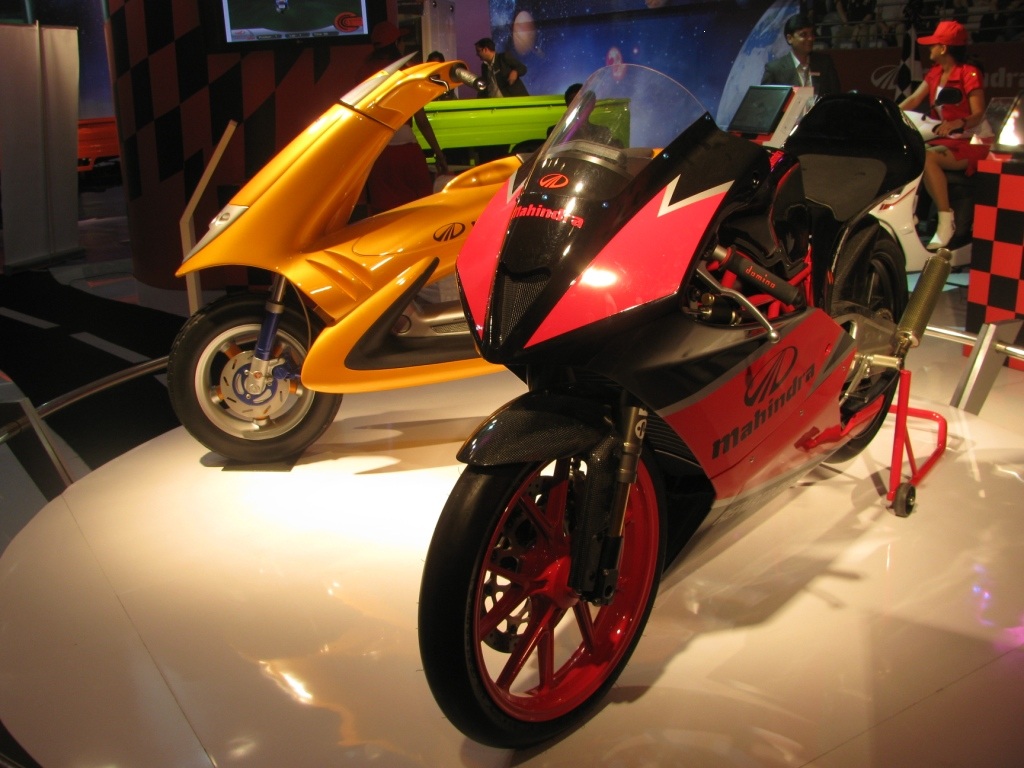 Mahindra Two Wheelers unveiled its new Concept Motorcycle and Concept Scooter at the Auto Expo in New Delhi. The Concept Scooter is equipped with a 2 Stroke, 124cc engine which supllies 9 Nm of torque. The max speed is said to be 120 km/hr. The Concept Scooter which wieghs about 105 Kgs, features both electric and kick start mechanism and can hold 7 litres of fuel.Mono Disc brakes at the rear and front are installed. The Concept bike from Mahindra 2 Wheelers houses a 124cc engine which churns out 32Nm of max torque and 53bhp of max power. The top speed is claimed to be a whooping 245km/hr! The fuel tank capacity is 13.5 litres. Brembo mono disc brakes are installed at the front and the rear. 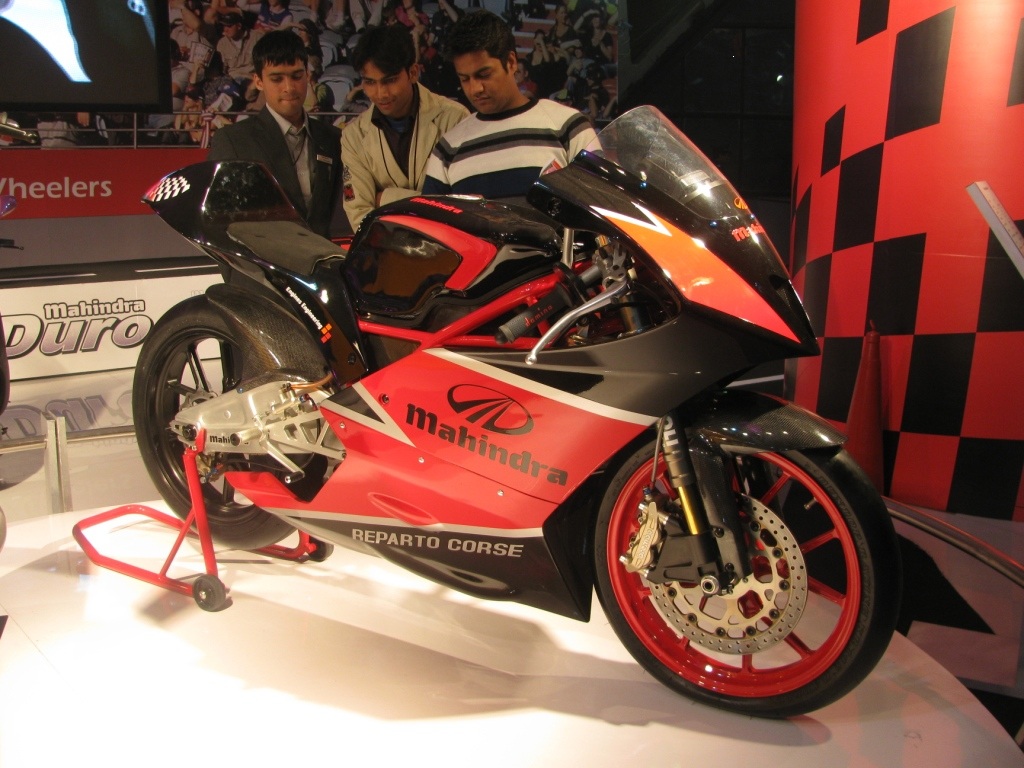 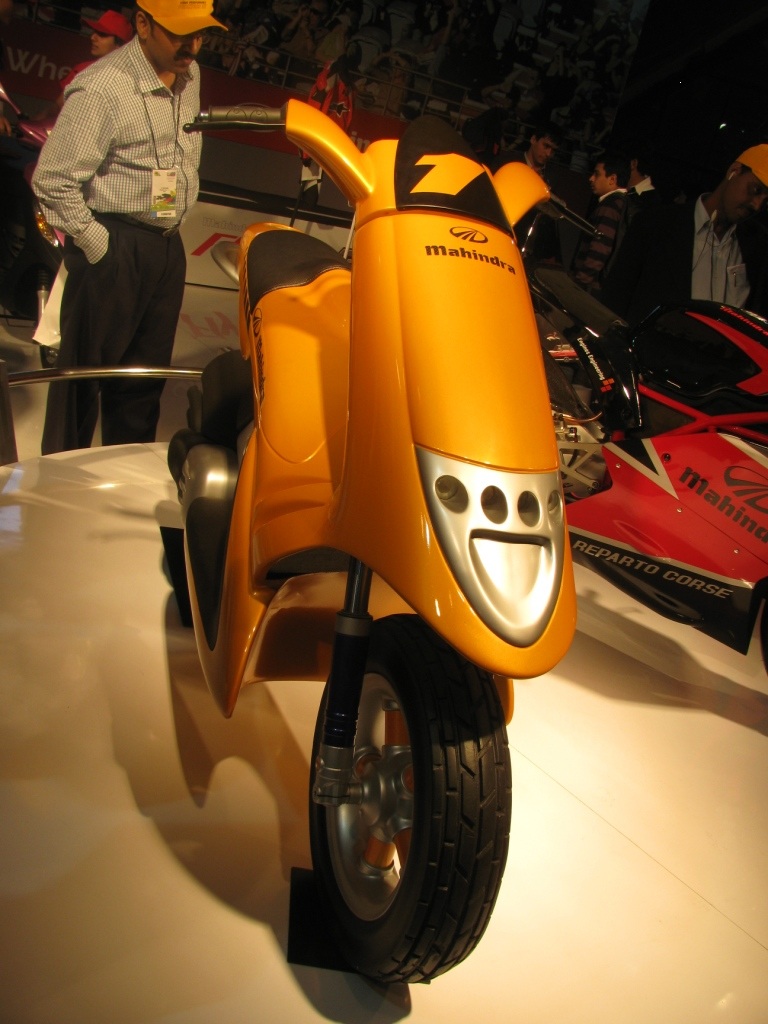 Apart from the concept Bike and Scooty, Mahindra 2 Wheelers also displayed its range of Power Scooters cinsisting of the Mahindra Rodeo, Duro and the FLyte.

When Mahindra 2wheelers took over Kinetic, they launched the existing Kinetic Flyte under their brand name. It marked M&M’s foray into the two wheeler market. Along with its Flyte, the company’s stall will also feature its recently launched non-geared Duro and Rodeo power scooters. 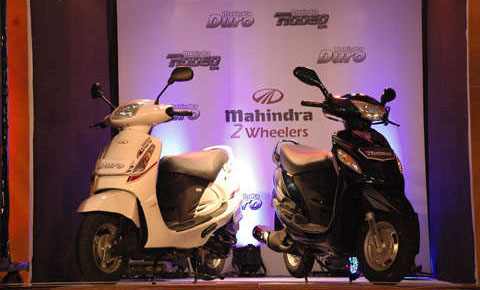 Mahindra 2Wheelers has a tie up with Taiwan based SYM Motors which supplying engines for their two wheelers. All the three scooters are powered by a common 125cc engine.

The company is aggressively marketing the Rodeo and Duro. The Rodeo is a completely new premium offering from the company which offers a host of features to its customer. The company all new ‘Power Scooter’ is currently being marketed as a new age vehicle which can take on same cc motorcycles with the comfort and practicality of a scooter. The Duro is a ‘Value for Money’ offering from the manufacturer which is powered by the same engine but its design is heavily inspired from the now defunct Nova. While speaking to the media, the President of Automotive Sector at M&M, Pawan Goenka, confirmed that the manufacturer will be showcasing an electric vehicle at the Auto Expo which will be launched towards the end of 2010. He further said that the company has developed a hydrogen and CNG powered vehicle which could be launched in the 12-18 months depending on the infrastructure. Commenting about the launch of the new mini-truck Goenka revealed that Maxximo has been designed and developed on the basis of extensive customer feedback.

Apart from catering to the needs to the scooter segment, Mahindra 2wheelers is eying to become a volume player. The two wheeler arm of M&M will be showcasing a few motorcycles in the 100-125cc engine category.  The company has been keeping mum when questioned if the motorcycles displayed at the Auto Expo will be launched eventually. The engines for the motorcycles will also be sourced from its Taiwanese partner SYM with whom Mahindra 2 wheelers has a technical tie up.

SYM currently has a 125cc engine in its kitty which powers its XS125K and Wolf 125 motorcycles. We strongly suspect that the motorcycles showcased at the Auto Expo will have engines based on the above bikes and heavily re-designed body panels to suit Indian tastes. 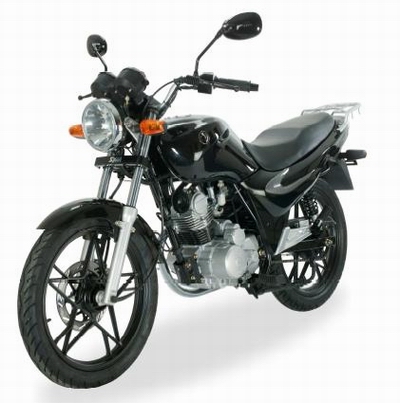 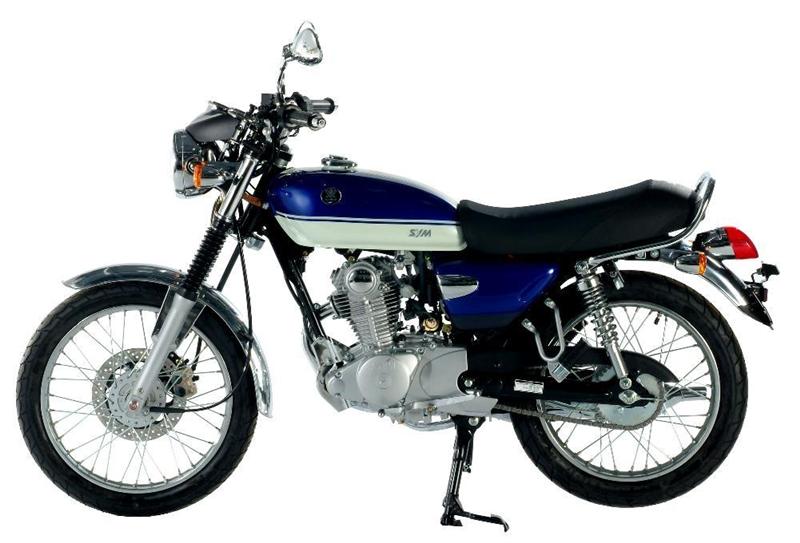 There is no specific information with respect to how many motorcycles the manufacturer will display. One thing is certain that Mahindra 2wheelers is previewing its motorcycles to gauge audience reaction so that necessary changes can be carried out before their launching.

The entire variety of Mahindra vehicles will be placed in Hall 2 and Hall 5.