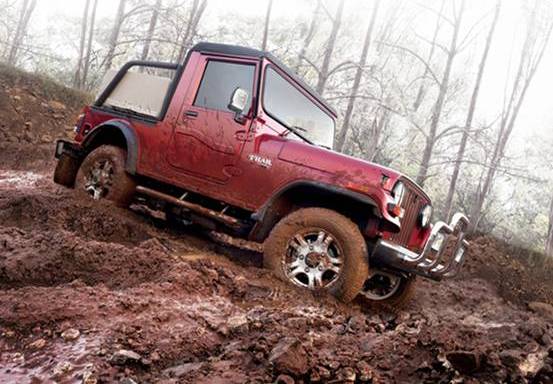 DI to be made at Kandivali plant in Mumbai, while the CRDe will be made in Nasik

The platform may be used for off-roading commercial vehicles, which may have military, paramilitary applications.

No commitments on volumes / numbers . The car has already been launched in South Africa / Europe.

Rajesh Jejurikar on the dias

Company to also constitute the Thar Club, where all the Mahindra Thar vehicles, and retro vehicles may register.

Thar CRDe to be the face of Mahindra Great Escape now on First phase launch in December – seven cities, rest of India in January 2011

The company is also offering a customized Thar – with several accessories to help you get through the muck with ease, things like winch, bar mounted aux lamps, twin exhausts (complete list coming soon)

Tagline – Thar hates Tar Available with 2WD and 4WD option, so you save money if you dont want the 4×4 option (wonder why you would buy this vehicle then, though)

Available in four colours – Black, Red, Silver and beige Independent front suspension, leaf springs rear. Has won an off-roading competition in South Africa Power steering but no A/C – the vehicle is said to be A/C ready though – whatever that means.

Mahindra is claiming a top speed of 150km/h for the Thar 2WD, 4WD High and 4WD Low modes. manually switchable.

Borg Warner transfer case, power steering, no change in traditional looks, based entirely on feedback and suggestions from customers.

Update 1 : Vivek Nayyar, VP marketing and sales addresses the conferences and reveals Mahindra’s brand strategy. The company wants to cover the entire spectrum of market segments in india, not just in MUV and SUV segments, but the passenger car market as a whole. The acquisition of Reva and Ssangyong are a part of the strategy. The company is also planning to get bigtime into the lifestyle motoring segment and the Thar is an important step in that direction. According to Mar Nayar, nationwide events will be held to promote off-roading and adventure motoring in the country and as a part of the plan, events like Mahindra Great escape will get bigger and better. Former BS Motoring editor Bijoy Kumar Y is now the man in charge to take care of all the Mahindra adventure activities in the future… Mahindra and Mahindra are launching their Thar 4×4  SUV tomorrow in Mumbai. As you would expect, Motoroids will be there at the launch ceremony. We will also be getting our hands behind the wheel of this new SUV and bring you the first drive report of the vehicle by evening. Apart from this, Mahindra & Mahindra will also be telecasting the launch of the Thar live.