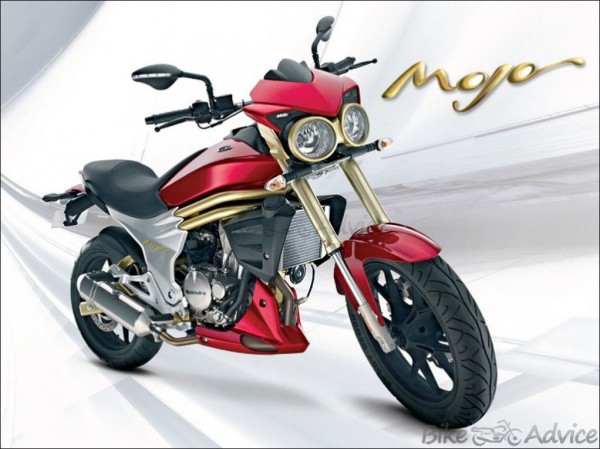 The Indian biking scene is buzzing with activity (what with the launch of Ninja 300 and Duke 390?) and with bikes like the Pulsar 375 coming our way, one doesn’t need to be a fortune teller to predict that things are looking better for us bike aficionados in near future.

You would remember that Mahindra Two Wheelers, one of the newest players in this market, stepped into the industry with a bang by unveiling the Mahindra Mojo 300 performance bike. The Mojo grabbed a lot of eyeballs and was in news for several days, which isn’t really surprising. All of a sudden, here was a performance bike from a renowned auto group that was aiming at giving some sleepless nights to some of the established bike makers. Many speculations later, it emerged that the Mojo was still sometime away from making it to production.

Now, it is being said that the Mojo 300 could come with an all new styling when it is launched in the next few months. This, we feel, could be a good thing as the current styling, which has been borrowed from the Malaguti MR250, comes across as uninspiring and a tad ordinary in this day and age.

The Mojo 300 would be a direct rival to the upcoming Bajaj Pulsar 375, the much loved Honda CBR250R and the new Hyosung GT250R. Powering the Mojo 300 would be a fuel injected, 292cc, single cylinder-four stroke engine with a 4 valve DOHC head. The engine would  be mated to a six speed ‘box and is expected to have a max power output of around 32PS.

Mahindra hasn’t yet confirmed if the Mojo is in the process of getting a makeover. The reason for the delay in launch, as cited by the bike maker, is that unlike earlier, the Mojo’s engine is now being developed in-house and the auto group needs some time to tune it to perfection.

Whatever the case might actually be, we just want the final product to justify this seemingly never-ending wait.