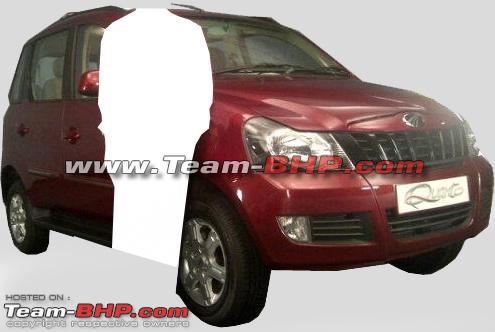 Mahindra’s Mini Xylo has been doing the rounds for long enough now, agonizing enthusiasts who were anticipating an early launch. In keeping with Mahindra’s tradition of naming its vehicles such that there is an ‘O’ sound in the end, the mini SUV will be christened Quanto

The Quanto shows us a face resembling the bigger Xylo in these spy images. The length of the vehicle will be less than four meters, without the spare wheel, which would make the vehicle qualify for the excise duty cut, further helping Mahindra to price the vehicle aggressively. The Quanto would be the first vehicle of its kind to slot into the sub 4 meter category.

The design of the vehicle is minimalistic, and wouldn’t be a big USP. It’ll present itself as a rugged, no-nonsense machine with trusted reliability and strength of Mahindra. The vehicle will be available in 5 and seven seater variants. The seven seater variant will have facing benches which could be folded to for luggage space. With the two seats in place, there would absolutely be no space for any luggage. Entry to the last two seats is through the tail gate. The last seats also get a pair of butterfly quarter windows for ventilation.

An interesting design detail on the Quanto includes a tail-gate mounted spare wheel which gives the vehicle a sporty look, so the positioning of the vehicle would be that of an SUV, and not a people mover. Mahindra may market the Quanto as a sporty, compact SUV, but under the skin, it would remain the Xylo with smaller dimensions. Don’t expect a 4×4 variant – the vehicle, in all probability would be a 2WD machine.

Power would be derived from a 1.5 liter common rail diesel engine with about 80PS of power and close to 200NM of torque on tap. Transmission duties will be handled by a 5-speeder manual unit. The engine should be sufficient to make the Quanto a sprightly vehicle, given its small size and low weight.

Interior of the Quanto would more or less be similar to the new Xylo, and would feature similar hard wearing plastics and functional switchgear and instrumentation. The top end variant of the machine is expected to come equipped with features such as dual airbags, ABS, steering mounted controls, parking sensors and driver seat height adjustment.

Official word is out that the Quanto will be introduced to our car market on 20th this month.