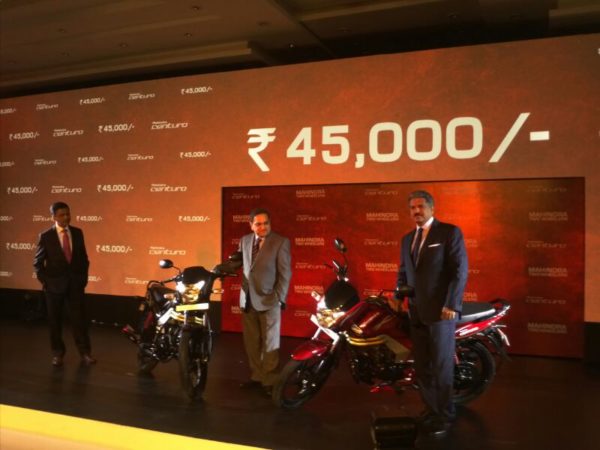 Mahindra Two Wheelers today announced that it has received  30,000 plus bookings for its Mahindra Centuro motorcycle within 6 weeks of the bike’s launch. The company is ramping up production capacity at its Pithampur plant to meet the orders. While 30,000 isn’t too big a number for market leaders such as Hero MotoCorp or Bajaj, for a new entrant like Mahindra, those numbers are very promising.

The Mahindra Centuro was launched on July 1, 2013 in Jaipur.  The bike sports a host of new features which address practical consumer needs. It is powered by Mahindra’s indigenously developed intelligent MCi-5 (Micro Chip ignited-5 curve) engine delivering a power output of 8.5 BHP @ 7500 RPM, 8.5 Nm of peak torque @ 5500 rpm and an astounding mileage of 85.4 kmpl (ARAI).

Features on the Mahindra Centuro include

The Mahindra Centuro is available across India at an Introductory Price of Rs. 45,000 (ex showroom- New Delhi).

“The fantastic response we have received for the Centuro, especially in today’s challenging market environment, is testimony to its strong value proposition and appeal amongst consumers. We would like to take this opportunity to thank all our customers for the faith they have shown in the brand and assure them that we will meet this demand in the shortest time frame possible,” said Mr. Anoop Mathur President – Two Wheeler Sector and Member of the Group Executive Board, Mahindra & Mahindra Ltd.