After teasing us for quite some time now, Mahindra and Mahindra is finally unveiling the Marazzo MPV. The car is aimed to to take the Innova Crysta off its throne but is expected to be priced much less. The car is expected to sit in a segment of its own between the Ertiga and Innova Crysta, here is all we know about the MPV ahead of its launch in a couple of hours.

The car has been designed in collaboration by Pininfarina and Mahindra’s Design Center in Kandivali, Mumbai. The design is inspired by a shark, the name too is derived from a Spanish sub language, where Marazzo means shark. The car is aerodynamically designed to mimic a shark. Apart from that all we know is the front would feature a signature Mahindra grill with twin chamber projector headlamps on either side, 17 inch alloy wheels and the tail lights showcasing a shark inspired design. 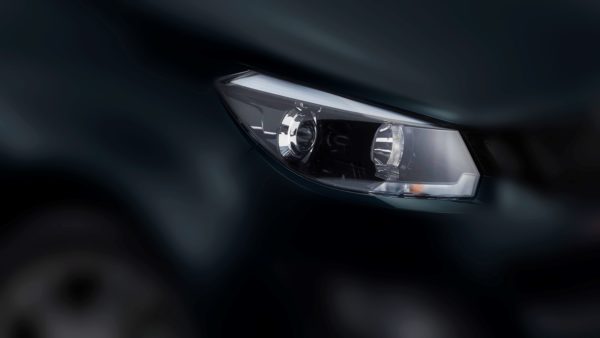 Inside, the Marazzo MPV gets a dual tone dashboard finished in beige and black. The car features some graphics on the dashboard finished in piano black and blue and purple hues across the instument console which add a bit of novelty. The car will also feature a first in segment surround cool roof vent for the rear which can circulate direct and diffused air within the cabin. A touchscreen infotainment unit finds place in the centre of the dash which is Android Auto compliant. The car also will be available with a 7 or 8 seat configuration. 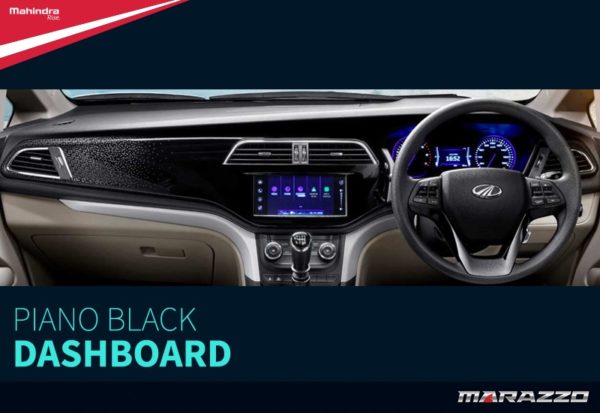 While there have been rumours of the Marazzo getting a 1.5 litre diesel power house, there has been no confirmation on that yet. Mahindra and Mahindra has however confirmed the Marazzo to be launched with an all new engine and transmission unit which is never seen in any Mahindra vehicle before. Apart from that, the car is speculated to have a six speed manual. There is no news on the option of an automatic or even a petrol engine as of now.

The car gets an all new 1.5 litre diesel engine which is mounted transversely. Peak power of 121 bhp at 3500 rpm and 300 Nm 1600 rpm of peak torque. The engine features various technologies to keep it refined and noise free. Mahindra has applied for a total of 11 patents during engine design. The MPV would get new features like the surround roof AC vent, integrated rear passenger sunshades and an emergency call feature which would alert emergency services when the airbags are deployed. The car will be available in 6 colour options, three of them Mariner Maroon, Aqua Marine, Poseidon Purple are new colour options.

An interesting QnA session with the Mahindra team. The car is to get a standard 3 year warranty which may be extended. For those concerned about the presence of only 2 airbags may relax. The car is designed in such a way with strong materials that it will protect its occupants in an event of a crash. The company is also working on an automatic variant of the car, which maybe out soon. Mahindra has delayed the introduction of a petrol engine till the introduction of BS VI norms. The prices mentioned above are that of the 7 seat configuration, expect to pay an additional INR 5,000 for the 8 seat configuration. Mahindra has aimed to sell 8,000 to 9,000 units a month and have trained their dealerships to attend to a new set of buyers. The new engine gives an ARAI claimed effieciency of 17.6 kilometre per litre. The newly developed platform may be used for a different car model in the future and the trio which came together for this project will very soon work on another project. Two hundred million dollars were invested in the development of the Marazzo.

The car makes an appearance on the stage. It is brought on to the stage and rotated for a view from all angles. Mahindra officials are then seen posing next to the car inviting photographers to click some pictures. The car is joined in by two other Marazzo’s one accessorised and one customised by the company. The car shown at the launch features a seven seat configuration.