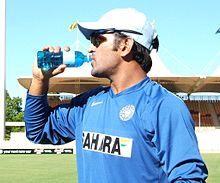 Telugu actor Nagarjuna has been named as one of the directors of the new team. Riders for Dhoni’s team are Dan Linfoot (Great Britain) and Florian Marino (France).