BMW Group has launched the 2015 Mini 3-door and 5-door variants in the country today. We are reporting live from the launch venue in Mumbai. 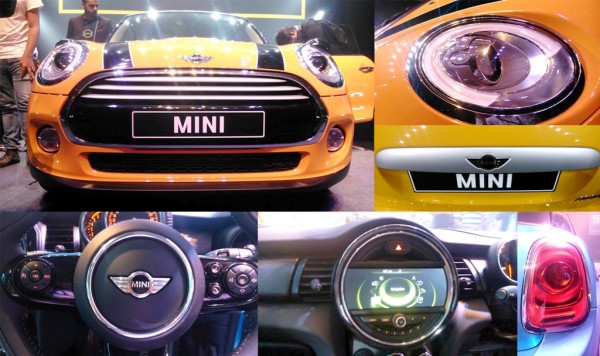 Still, all the trademark Mini styling elements have been preserved, notably the hexagonal grille which has evolved a bit, those cute, rotund headlights which can now be optioned as full LED units, the upright windscreen, the floating roof and a huge round, center piece inside the cabin- for 2015, it houses a large high-res 8.8-inch central screen instead of the speedo. 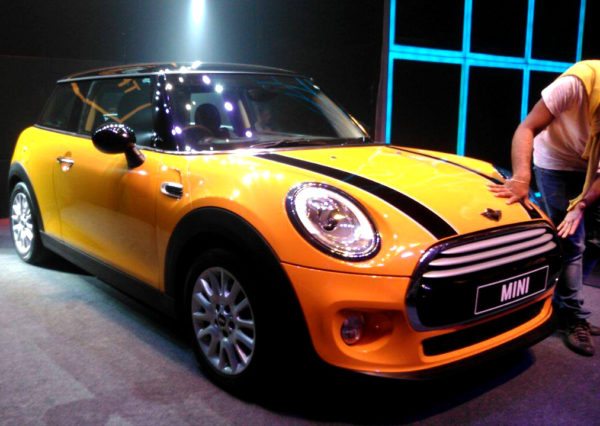 In India, the Mini 3-door will spawn a Cooper D(diesel) and Cooper S (petrol). The Cooper D uses a 1.5-liter three-cylinder diesel engine which makes 114 hp of power and 270 Nm of torque, which is mated to a 6-speed Steptronic automatic transmission sending power to the front wheels. 0-100 km/h is dispatched in a brisk 9.2 seconds and the Cooper D achieves a top-speed of 200 km/h. What’s interesting is that the 3-door Cooper D will average a claimed 25.6 km/l. 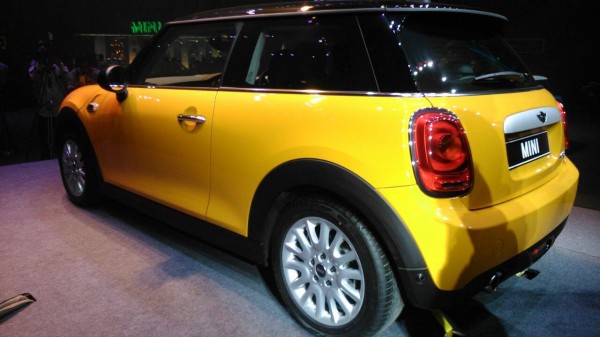 The Cooper S is the boy racer of the two here and is powered by a four-cylinder 2.0-liter petrol engine producing 192 hp of power and 280 Nm of torque, paired to a similar 6-speed automatic gearbox. The Cooper S finishes the 0-100 km/h sprint in 6.7 seconds, achieving a top-speed of 233 km/h, while returning an acceptable 18.2 km/l. 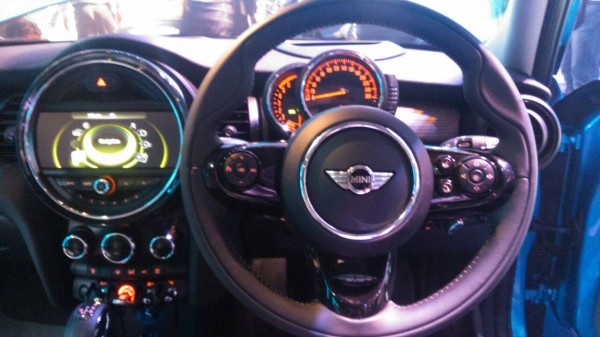 For 2015, boot volume too has increased by 51 liters, and now stands at 211 liters. With the rear seats folded, the new 3-door Mini can take up to 731 liters of luggage. The Mini 3-door rides on 16″ light alloy wheels (Victory Spoke silver) wrapped around a set of 195/55 run-flats. Mini also offers a choice of two differently designed 17″ alloy wheels (Tentacle Spoke and Roulette Spoke-dual tone) as an option.  A total of 14 exterior shades will be offered on the car, which include Pepper White, volcanic Orange, Chili Red, Mini Yours Blue, while the optional metallic shades constitute of Moonwalk Grey, Blazing Red, Electric Blue, British racing Green, Iced Chocolate, Deep Blue, White Silver, Midnight Black. 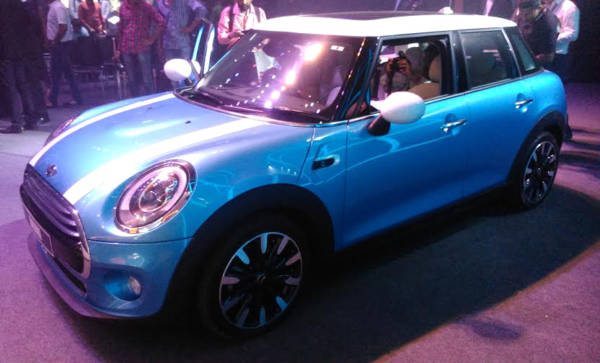 The 5-door Mini for India is offered in a single variant, the Cooper D. It is powered by the same a 1.5-liter three-cylinder diesel engine which produces 114 hp of power and 270 Nm of torque. The same 6-speed Steptronic automatic transmission drives the front wheels of the car, and propels the car from 0-100 km/h in 9.2 seconds, while top speed is a claimed 200 km/h. Like the 3-door model, the 5-door also delivers an impressive fuel efficiency of 25.6 km/l. 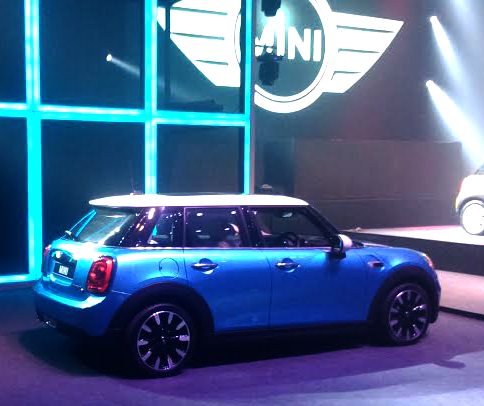 The larger dimensions have increased rear legroom by 72 mm, the headroom by 15 mm and elbow width by 61 mm over its 3-door sibling, and Mini claims that 3 people can comfortably sit abreast in the second row. 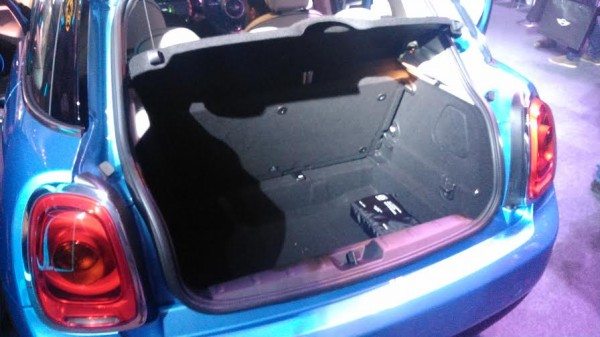 Boot space too has gone up by 67 liters to 278 liters and now stands at a cavernous 719 liters with the rear seats folded. Like the 3-door, the 5-door will also be available in a range of 14 aforementioned exterior colors, with room for a lot of bespoke activity. 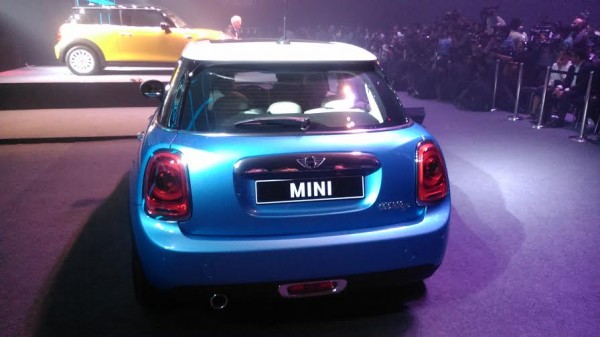 The interiors can be upholstered in a choice of cloth, leather and leatherette trims, while a host of other color options and trims can be specified for the dashboard/interiors.

The exteriors can be further optioned with black or white bonnet stripes, panoramic glass roof, all-LED headlamps with cornering function, Park Distance control and a spare wheel with jack- even a space saver isn’t present here.

Mechanically, the 2015 Mini can also be optioned with MINI Driving Modes, which include a Active Damper Control function.

All Minis will come as CBU (Completely Built Units) for now and BMW India might consider assembling them in the future once demands soar. Mini India currently operates out of four dealerships across the country, and a couple of them will be added to the list soon. 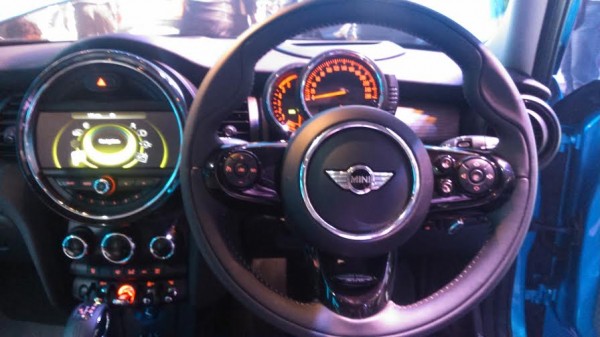 The Minis can be serviced at any BMW dealership across India. 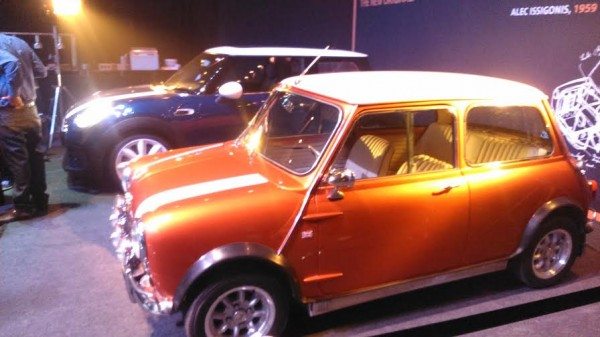 This old-timer had also graced the event with it’s presence, just to put things into perspective.

Post to be updated with more details and pics as they come by. Stay tuned!