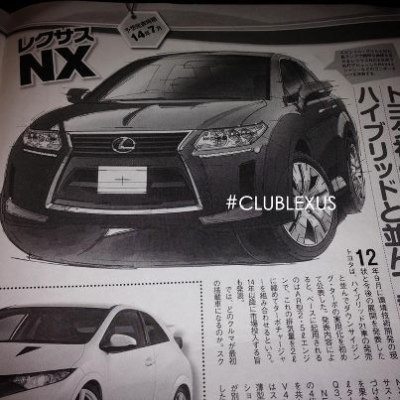 The compact crossover segment has to be the fastest growing fragment of today’s car market. Thanks to Ford and Renault achieving great success with the new EcoSport and Dacia Duster respectively, almost all major automakers are fast coming up with new Compact Crossovers/SUVs to cash in on the latest trend that prevails in almost all car markets around the globe.

Lexus, the luxury car division of Toyota, too is working on a compact crossover which could be called as NX. The NX would be both smaller and cheaper than the RX. Seen here is a speculative rendering of the NX compact crossover. The pic comes from some Japanese magazine and was posted by ClubLexus.com.

It is being said that the rendering might be very close to what the upcoming car might actually look like and going be these claims, it seems like the front fascia of the upcoming Lexus would get a multi-sided grill with a dose of chrome and DRLs positioned just below the headlamps.

It is also being said that Lexus has applied to attain trademarks for names NX 200t and NX 300h. This means that the new compact crossover might be launched with a new 2.0 litre turbocharged petrol engine and a 2.5 litre hybrid powertrain that currently powers the ES 300h.

The new Lexus NX Compact Crossover is expected to be unveiled in 2015.