BMW is having big hopes with its new UKL front wheel drive platform that will underpin most of the upcoming entry level cars from the famous German premium car maker.

BMW’s Mercedes B Class rival will be based on the BMW Concept Active Tourer that was previewed at the Paris Motor Show last year and the new Bimmer is likely to be named as the BMW 1 Series GT.

BMW is already busy with the development of the BMW 1 Series GT and seen here are some CAD diagram leaks which reveal a part of the design of the production spec car. 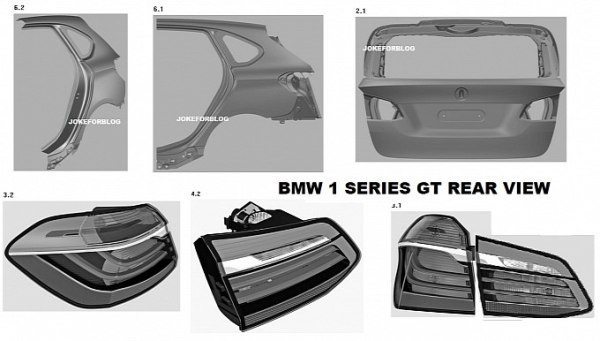 As can be made out from these CAD drawings, the car won’t look too unlike the concept and will basically come with a slightly toned down version of the concept car’s front and rear end. At the rear, the production spec car will have a slightly different fifth door. The new 1 Series GT is expected to come with optional side camera.

It would be a folly to dismiss cars like the Mercedes A Class and the upcoming BMW 1 Series GT as cut price versions of the current entry level models in the line up of these German biggies. Cars like the 1 Series GT, which are aimed to be volume sellers, will cater to the section of car buyers which is looking for a dimensionally small car (read: smaller than the entry executive sedans) with no compromise on features, build or on most of the qualities for which these mighty Germans are known for.

The only thing that remains to be seen is if the front wheel drive Bimmers would continue to have class leading road manners and handling prowess.