Hollywoood actor and committed environmentalist, Leonardo DiCaprio who owns a Tesla Roadster, a Fisker Karma hybrid and a Toyota Prius, has joined hands with Venturi Automobiles to form a Formula E racing team. 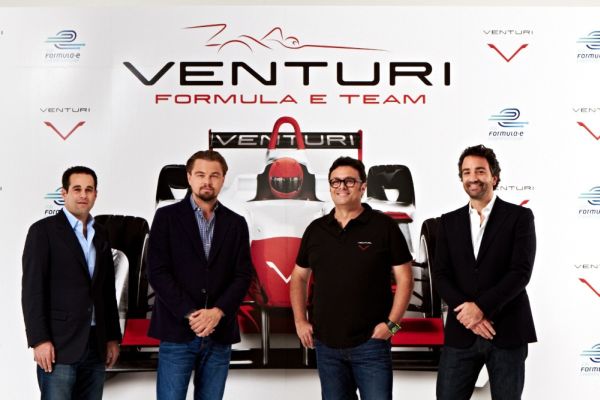 The Venturi Grand Prix Formula E Team, which is based in Monaco, will compete in the Formula E Championship which kicks off next September.
According to DiCaprio “The future of our planet depends on our ability to embrace fuel-efficient, clean-energy vehicles. Venturi Grand Prix has shown tremendous foresight in their decision to create an environmentally friendly racing team, and I am happy to be a part of this effort.”
Venturi founder Gildo Pallanca Pastor said “Venturi has been a pioneer in electric high performance vehicles for more than a decade and Formula E gives us the fantastic opportunity to further improve our advanced technologies through motorsport, as well as compete all over the world.”

With the announcement of the formation of a Formula E team, Venturi has also confirmed their intentions to become a constructor for the series. Although the details are not known as of yet, it is being said that the company’s race car will debut in the second season and use a powertrain that is based on the one used in the VBB-3.

This isn’t the first time DiCaprio has dipped his toe into the auto industry. He was an equity investor in Fisker Automotive and the first customer to receive the plug-in hybrid electric Karma.

The first Formula E season is scheduled for 2014-15, with races scheduled in Beijing, Los Angeles, and London.