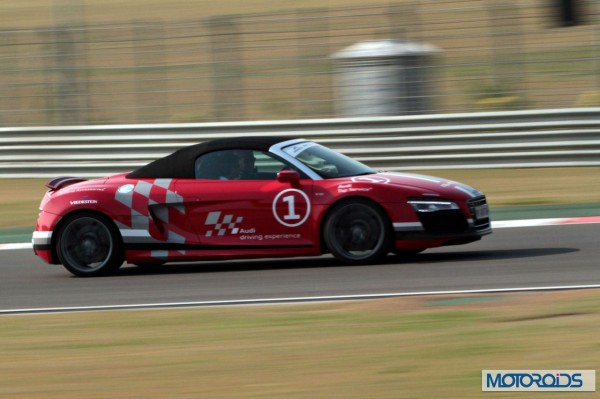 In the recent past, Apollo has emerged as a hot favorite amongst the car manufacturers as OEM suppliers and with their Vredestein acquisition; they have fortified their premium positioning.

Apollo, along with their presenting partner Audi India launched the Vredestein range of premium tyres here at the Buddh International Circuit (BIC). The Vredestein range of tyres takes pride in its design collaboration with GiorgettoGiugiaro, yes, the `Car Designer of the Century`. Let the words `designer tyres` not fool you, the Vredestein range launched here have a speed rating of “V” to “Y” (240-300 kph). Choosing the BIC for the launch had to be the obvious choice, to exhibit the capabilities of this famous European brand which is `Designed to protect you`. 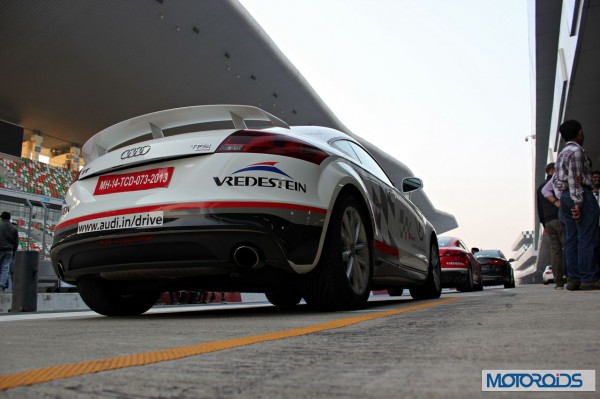 As soon as we landed at the BIC, the sight of Audis in cup car style livery shod with Vredestein tyres was enough to whet our appetite (R8 Spyder, TT, RS5, S6 and more!!). The track day however started without much glitzy fanfare, Apollo`s mantra is clear, let the tyres do the talking. The day was split into 3 events, namely the “Slalom”, “Q drive” and the “Hotlap”. A select bevy of Audi cars shod with Vredestein rubber were pressed into service. All the invitees were batched in groups and given a chance behind the wheels. 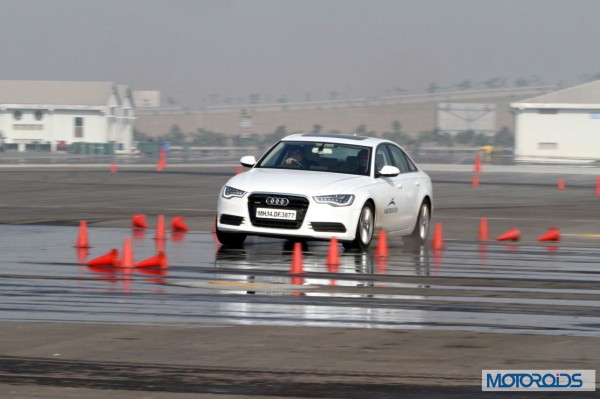 We started with the Slalom event, typical placement of cones followed by a tight hairpin right hander into fast- wet lane change and hard braking. The A6 we drove was shod with Vredestein Ultrac Cento 225/55 ZR17 tyres. While it was easy to slam the throttle and dodge the car around the cones, the tight hairpin right is what caught most of us unawares, who went in a bit too hot and ended up jumping on the brakes to correct the line. The fast lane change through the wet patch is where the tyres shone brightly which was followed by a heavy braking (end of course) line. 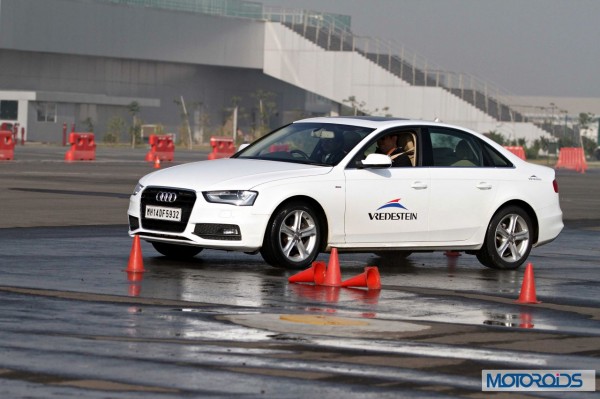 The grip offered by the Ultrac Centos made a light work of the few hundred meters of pounding these tyres received. After having taken the first lap a bit cautiously to understand the placement of cones, our confidence behind the wheel increased manifold for the remainder of two laps, thanks to the sure footedness and fantastic feedback from the tyres.

The next event was the “Q drive”, which, as the name suggests was behind the wheels of the Q series from Audi. The drive was held at a course carved out in an empty field, complete with “chicken potholes”, “rumblers”, “negative banking”, “slush” etc types of varied terrain. The Q3s were shod with Vredestein UltracSUV Sessanta 235/65 R17 rubber and did the job of conquering the terrain thrown at it by the Q drive. 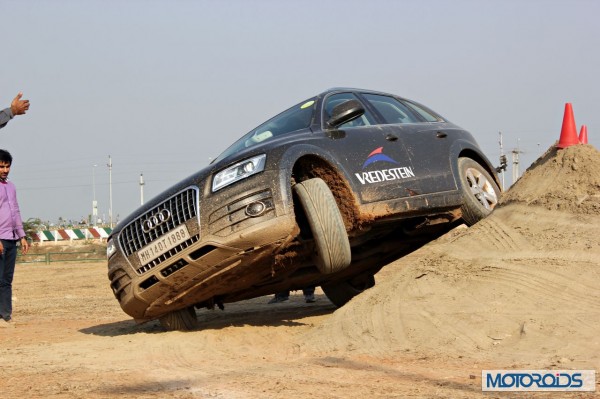 One look at the tread pattern of the SUV Sessanta, and we won`t blame you if you question the feasibility of such a design. The tread pattern is contemporary (no wonder it’s designed by Giugiaro), no rugged block pattern here as one would expect for an SUV. However, once on the roll, the tyres handled the rugged terrain with as much ease as the Ultrac Cento`s handled the slaloms. Gravel, hard braking, acceleration tests, slush…the SUV Sessantas gobbled up everything without breaking into sweat. 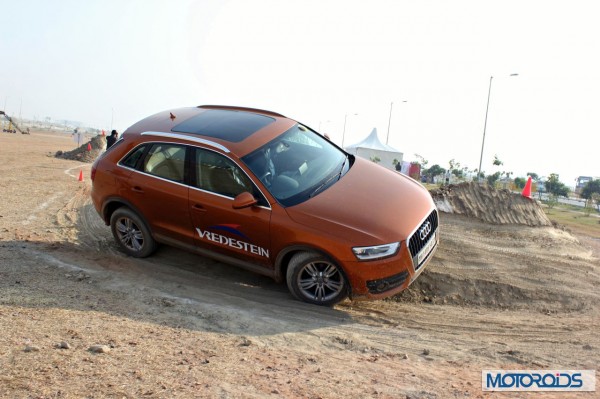 The consistent performance offered on varying surface only helped us to push the Quattro power, further. This tyre in particular speaks volumes about the engineering that has gone into its production with the dexterity they displayed in conquering the demanding terrain of the track. Impressed!! 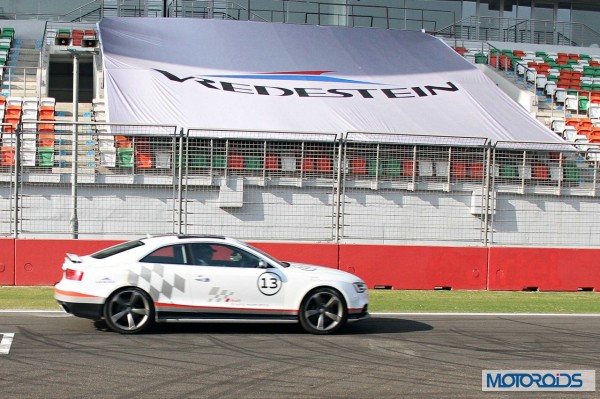 After playing around dust and dirt, staying out for extended hours in the sun it was time for a good lunch. The idea of “Hotlaps” in fastest cars from the 4 ringed stables did not sound very pleasant after a heavy lunch. We took our time to feel comfortable before jumping into the R8 for a demo lap, 10/10 journos feared the potential threat of changing the interior trim of the R8 driven hard at BIC post lunch! Audi was graceful enough to invite Aditya Patel and Ameya Walawalkar to do the hot lap demos for us. The demo lap in the R8 was enough to understand what the cabriolet is capable of! Right from the word go on the long straights where the seats suck you in to the hard braking where the seatbelts dig into your chest feeling, the R8 provided enough fear (for a handful) and ‘never before’ thrill for many. 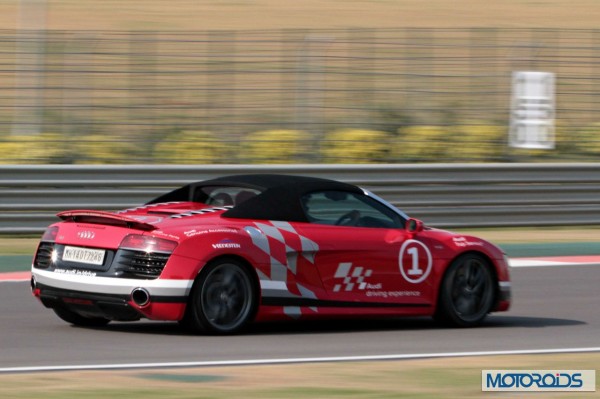 The actual “hotlaps” meant we drove around the circuit in formation (fast one mind you) in the TTs shod with VerdesteinUltracSessanta 245/45 ZR17 rubber. The TT, capable of speeds above 240kmph and a 0-100 dash in under 6 seconds was a thrilling tool for us to explore the track. We only managed a shade under 210kmph on the track, however what impressed us was the impeccable handling around the turns (very few unfortunately). Even with the inside set of wheels drumming on the kerbs, the grip levels felt absolutely predictable and confidence inspiring. Thanks to the sticky rubber, we were able to push harder and explore our own limits to the max. Within minutes, the two laps ended leaving us all elated. How many times do you get to drive a fast car shod with everyday performance rubber on a F1 track? The thrilling experience made us long for more, like a kid at the candy-shop, hoping for a few more laps but unfortunately due to time constraints that was not to happen. 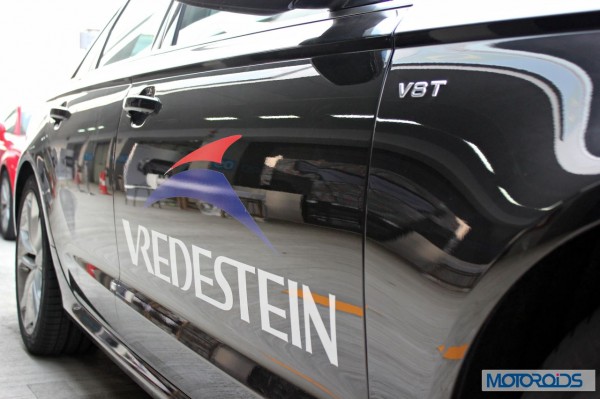 Overall, the performance meted out by the Vredesteins across the varied surfaces left us impressed. High performance car owners need not look at grey market for import rubber anymore, with the Sessanta range, these needs would be easily taken care of.Apollo intends to have the range imported to begin with, as the brand establishes and sales gain momentum they could be manufactured locally.

The pricing details are as follows