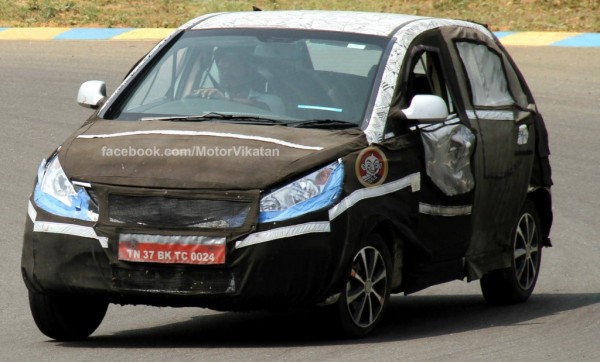 That the good folks at Tata Motors are busy readying a comprehensively updated version of their Vista hatchback is a well known fact.

By now, we have come across at least two dozen spy pics of the upcoming 2014 Vista facelift. While most of these pics have failed to reveal anything new about the Vista refresh, the latest spy pic, which you can see in the lead image, gives us a glimpse of the 2014 Vista’s Manza hybrid inspired front grille.

Thanks to new bumpers at both the ends, the 2014 Tata Vista facelift will be a wee bit longer than the current model. Apart from a new Manza Hybrid inspired front grille, the car will also get a set of new headlamps for its front fascia. The biggest change, however, will lie at the rear. The 2014 Tata Vista facelift will NOT come with the typical X-Mas tree styled taillamps and would instead get a set of more conventionally styled units. The registration plate housing too would move upwards and on to the rear hatch.

Engine options are likely to be carried over from the current model, albeit with minor tweaks for improved fuel efficiency and better driveability.

The 2014 Tata Vista facelift is being expected to make its public debut at the upcoming 2014 New Delhi Auto Expo, which will be held in February next year. The updated car could go on sale before the advent of next financial year.

Stay tuned to Motoroids for more spy pics and updates on the upcoming 2014 Tata Vista facelift.