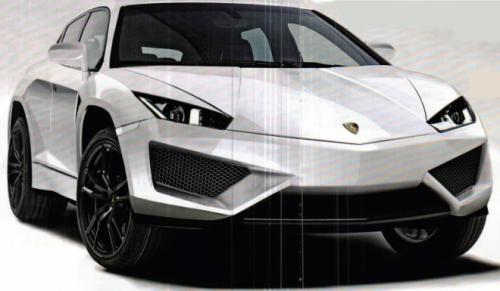 We at Motoroids have been closely following the development of SUV by Lamborghini- the popular supercar manufacturer. Recently, the aforementioned Lambo was showcased to a selected few at New York. It may be noted that this cannot be really called a public debut as the design has not been finalized yet. The recent preview was to gauge the reaction of the potential buyers.

However, reliable sources suggest that the car will be soon headed to Beijing for China Auto Show.

Going by what we are hearing, this Lambo doesn’t looks unlike the BMW X6 and this can be confirmed by the images we had chanced upon a month or two ago. It is being said that the car is a full sized SUV and we wonder if it is based on the parent VW’s PL71 platform.

Basically, the car looks like a Lambo supercar on steroids and that can’t be a bad thing. Can it be? As expected, the car comes with LED lamps and ORVMs with a video camera integrated in them. The highlight at the rear has to be four trapezoidal exhaust tips neatly integrated in the bumper diffuser.

The SUV rides on very tasty looking 24-inch rims that quite mimic those seen on the almighty Aventador. On the inside, the seats have a familiar look and seem to be inspired by those in the Sesto Elemento (does not Italian names sound so sensuous?).The centre console runs all the way back to the rear passenger seats and one should find a liberal dosage of exotic CF inside.

We are so waiting for this car to make an appearance at the Beijing Auto Show that commences soon on April 23.