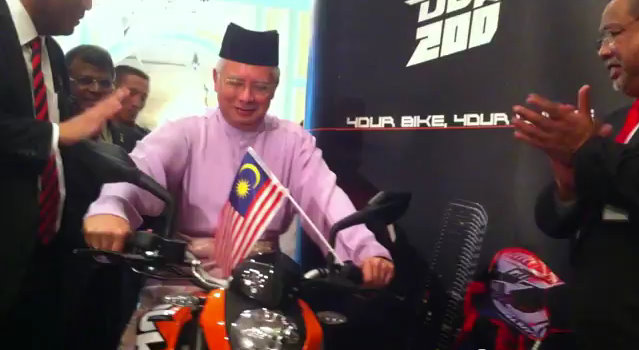 Ah! Not really! (This could soon be my trademark line)

Well, its launched, but not launched in India yet! Yes you heard it right. Conceptualized in Austria, Made in India, and ladies and gentlemen,  launched first in Malaysia!

Is this a test bed for BAL – KTM? Could be, but we hope it isn’t. After all the Malaysian Prime Minister launched the machine.

At the price tag of 110,000 it could bring some serious threat to the R15 and the CBR. Of course the mango-people would rather prefer the nice beefy fairing on the new R15, and the number obsessed  people would opt for the CBR.  With the Hero Honda, err the Hero Moto Impulse coming up it could also under cut the S – sized duke price.

But one thing is sure, the Bike is ready and could be launched soon! Who knows, right after the R15 launch!