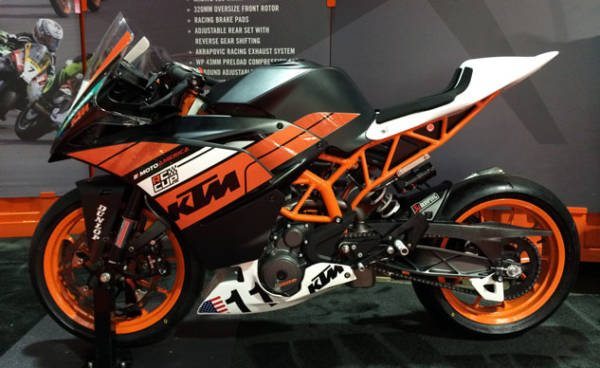 The KTM RC 390 Cup race bike is a track only tool, available for purchase for participants of the 2015 RC Cup Series, a five-round series in conjunction with the 2015 MotoAmerica Racing Series. The RC Cup Series will allow riders between the ages of 14-22 years All riders must race aboard 2015 KTM RC 390 Cup Racebikes. These motorcycles are designed as racing competition bikes, aren’t street legal and have been prepared by KTM with over 40 PowerParts and other enhancements to increase racing performance. Some of the new features include:

Each RC Cup Racebike has been dyno-tested and tuned to 38 hp. To maintain competitive parity, the engine is sealed and may only be serviced by KTM’s trackside partner HMC Racing. Modified street-legal RC 390’s will not qualify for participation in the MotoAmerica KTM RC Cup Series but will be allowed in regional racing.