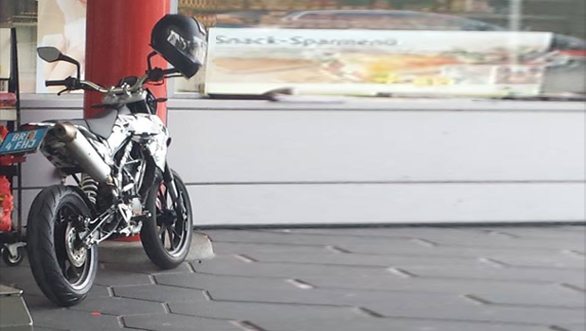 The pic we have here is that of the a KTM 390 Supermoto prototype that has been caught testing in Austria, which is basically the land of the KTM.

From what this pic reveals at the first glance, the KTM 390 supermoto is likely to share its frame and swing-arm with the 390 Duke and currently, the upcoming motorcycle seems to be in the preliminary stages of development.

A closer look also reveals that the the prototype also shares its wheels and the ABS module (at rear end) with the Duke sibling. Quite unsurprisingly, the bike gets a similar suspension set that consists of USD forks at front and a mono at the rear. In typical supermoto fashion though, the front suspension gets longer travel than that of the forks on the Duke naked bikes. Also, the bike seems to haev got a different swingarm angle, that leads to taller riding height and marginally more ground clearance than the Duke series of bikes.

If the good chaps at VisorDown are to be believed, the upcoming KTM 390 Supermoto will come to India sometime in 2015. Very much like the Duke line up and the upcoming RC series bikes, the Supermoto 390, which shares its platform with the Duke sibling, will be manufactured in India and is likely to be priced not much higher than the KTM 390 Duke once its enters Indian bike market.

Stay tuned to Motoroids for more updates on the models from KTM!