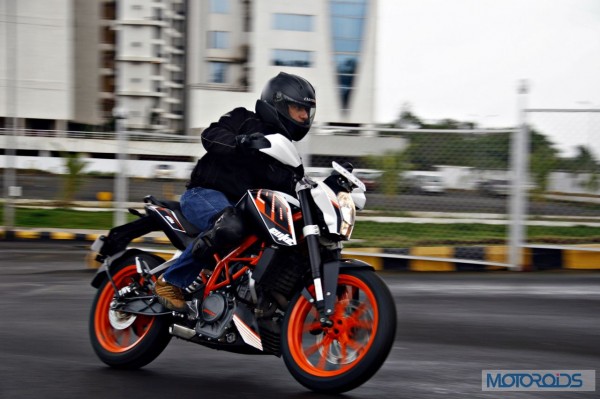 Believe when we say we saw it coming! KTM 390 Duke, one of the most exciting bikes to have come to us this year, has become dearer by more than INR 6000. It may be noted that the KTM 390 Duke was launched in India at an “introductory” price of INR 1.8 lakhs and it has almost always been known that the bike would become slightly pricier a few months after its launch.

The 390 Duke now has an ex showroom price of INR 1.86 lakhs in Pune and the difference in the on road price is around INR 7000. However, worth a mention here is that in spite of a price increase of around 3.33 %, the 390 Duke still remains unbeatable value for money and offers enough excitement to make us performance junkies ignore the minor price hike.

Powering the KTM 390 Duke is a 373cc, single cylinder, liquid cooled engine that has a max power of 43 Bhp and benefits from a peak torque of 35 Nm. The engine comes mated to a six speed manual gearbox. Thanks to scintillating engine performance, coupled with good ride and handling manners, the KTM 390 Duke has been garnering a lot of rave reviews from bike aficionados and auto experts from around the globe.

What do you have to say about the KTM 390 Duke price hike? Do let us know by commenting below.