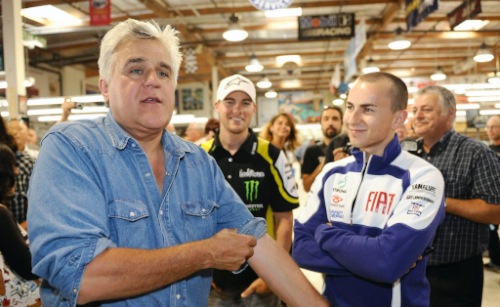 Sir Leno, you are definitely old, probably have gotten stronger over the years; and although there is no reason to call you ‘freedom’ we would love to see you waving the cheered flag at the Indianapolis MotoGP.
Apart from the very important and dangerous task of waving the flag, Mr. Jay Leno, the comedian and late night television host  will also be presenting a trophy to a podium finisher and meeting up with MotoGP teams and riders during the Sunday race.
“The Indianapolis Motor Speedway is one of the greatest spectator tracks in the world. Thankfully my R1 will stay in the Big Dog Garage as I plan to watch and cheer on our three Americans right from the pits,” said Leno, who is also a well-known collector of motorcycles and cars besides his comedian duties with the NBC.
The Indianapolis GP race is scheduled on the 29th of August, 2010 and is the 12th round of the 2010 MotoGP season.
News
,
Comments
Leave a Reply Cancel reply