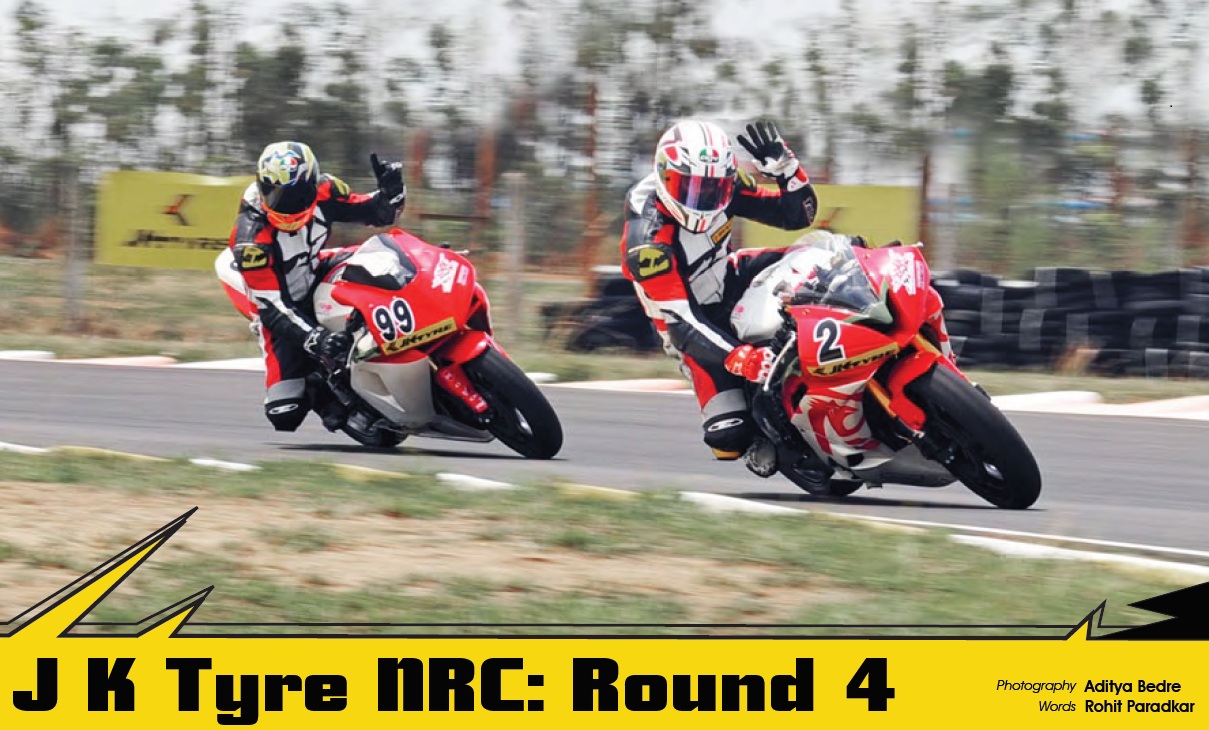 As I already mentioned in my column earlier in this issue, Indian motorcycling is witnessing a rebirth and the same holds true for our motorsports as well. This fact was clearly evident especially with the fourth round of the J. K. Tyre NRC. While this championship consisted of all privateers racing for sheer fun, we suddenly have  not one, but three serious teams that are now setting up operations for a new ace of Indian motorsports.Welcome Red Roosters, Gladiator Sports(GS) and Ten10 Racing! After the last few rounds at the Kari Speedway in Coimbatore, the NRC moved to Chennai – back to the Sriperumbadur  circuit, which is truly a playground for all these racers. The qualifying round was business as usual – hot weather, an even hotter track and some of the best machines and riders lining up for the track times. Red Roosters team rider Rajani claimed P1 in no time, with his Yamaha R6 performing to his expectations. His team mates Sameer V. and Rohit Giri had similar results too, putting P2 and P3 in the Rooster’s bag as well. Following them were last year’s novice champion Praveen Keerthi and his team mate Vivek Pillai, racing under the GS banner. Then was the first 1000cc caterogy machine of Alok Sashidhar that took the P6, while P7 was cinched by Ranchi-boy Sumit Lucas. Ten10 Racing, who had only one race experience behind them as a team, had a commendable qualifying session with Vikram V., Jebba, Poncho and Sanjay Kumar claiming P8, P9, P10 and P11 respectively. Last race’s podium finisher Balaji, was content with P12 while Prakash Murali and Prithvi M. took P13 and P14 respectively.

Ten10’s Rajeev Raju crashed during qualifying, but his prior lap time got him P15. P16 was earned by GS’s Alish Abdullah, while the final two places went to Ten10’s Ramji Govindarajan debutant Balavijay B.As the race started the red-white R6 of Rajani blasted down to take the hole shot from there-on the Yamaha kept opening the gap on the rest of the pack all the way till the chequered flag. His team mates Rohit Giri and Sameer V. had a good start too, but the latter lost a couple of positions to fall behind Vivek Pillai and Praveen Keerthi. The two GS riders got in a dogfight of their own and Keerthi finally overtook his team mate in Lap 3. He continued his pace to overtake Red Rooster rider Rohit Giri in Lap 6 to finish in P2. Meanwhile Sameer overtook Vivek to claim P4. Ten10’s efforts met with misfortune as both their lead riders Jebba and Poncho were riding on overheated engines which wouldn’t allow them to perform to their usual caliber. Jebba finished in P6 for his category while Poncho, inspite of a sprained wrist managed to hang on to P7. Sumit Lucas meanwhile dominated the Novice category and won in his respective category. Balaji who earned the second spot was 33 seconds behind Lucas, while debutant Balavijay took the last spot on the podium in the first supersport race of his career! 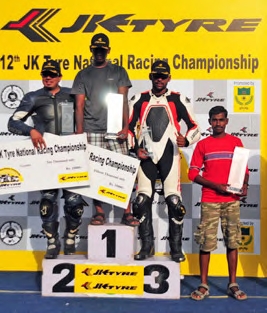 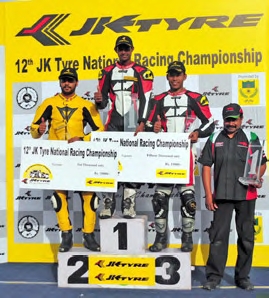 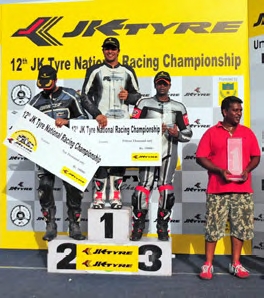