Overall vehicle dependability in India improved, averaging 206 problems per 100 vehicles (PP100) in 2015, down from 218 PP100 in 2014. Owners of vehicles that were all-new to the market or substantially redesigned at the time they were purchased report 17 PP100 fewer than owners of models that had already been available in the market in previous years. The greatest difference in all-new models is in the vehicle exterior category, with 12 PP100 fewer than current models.

Overall, owners report fewer problems in the engine and vehicle exterior categories. Engine problems decrease by 8 PP100 in 2015, compared with 2014, while vehicle exterior problems decrease by 5 PP100. There is also a significant reduction in the incidence of problems related to excessive fuel consumption (EFC) for both petrol and diesel cars. EFC problems drop to 5.5 PP100 in 2015 from 8.6 PP100 in 2014, contributing to improvements in the engine category. This drop in EFC-related problems is consistent with the continued improvement in fuel economy owners have reported for both petrol and diesel cars over the last five years.

The incidence of HVAC problems has increased during the past five years to 24 PP100 in 2015 from 18 PP100 in 2011. The study finds a correlation between the HVAC problems reported and the number of passengers riding in a vehicle. In 2015, 67 percent of new-vehicle owners indicate that three or more people ride in their vehicle, up from 50 percent in 2011. When three or more passengers are in the vehicle, HVAC problems average 27 PP100, compared with 20 PP100 when only one or two are in the vehicle.

“As the number of people riding together increases, the number of HVAC problems reported also increases,” said Arora. “With the increase in second- and third-row occupancy, it is imperative for automakers to provide a reliable HVAC unit that optimizes the air-conditioning effectiveness for all the occupants.”

The 2015 India Vehicle Dependability Study (VDS) is based on evaluations from 8,507 original owners who purchased a new vehicle between July 2011 and September 2012. The study includes 65 models covering 16 nameplates and was fielded from January through April 2015 in 30 cities across India. The VDS is one of two J.D. Power Asia Pacific automotive quality studies for the India market. The 2015 India Initial Quality Study (IQS), which measures problems of new vehicles at 2 to 6 months of ownership, will be published in November. 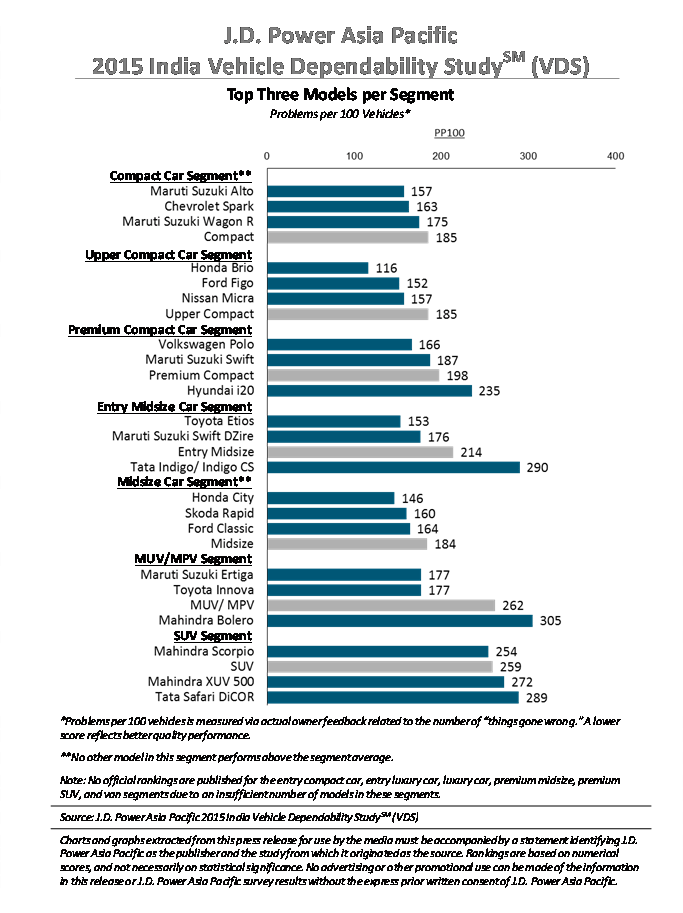 Chapter 1 – Fuel Type (Petrol vs Diesel) and its impact on Vehicle Dependability in India.

Chapter 2 – Vehicle Type as its impact on Vehicle Dependability. Why do bigger cars have poorer vehicle dependability?