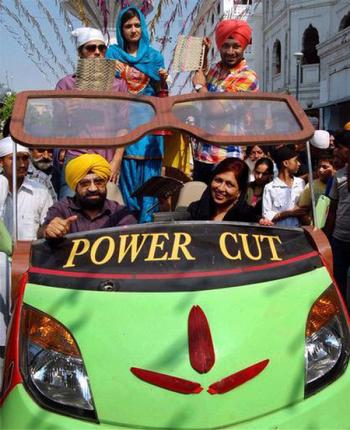 “Sad demise of Punjabi king of comedy who took up social issues and problems of common through his road and television shows once gain brings up the issue of fatal road accidents in the country as India with more than one death and four injuries every minute has the dubious distinction of reporting highest number of road fatalities in the world. Total 10 per cent out of more than one million fatal road accidents across the world happen in India .” said Mr K.K.Kapila, chairman, International Road Federation.

“During the year 2009, there were around 4.9 lakh road accidents, which resulted in deaths of 1,25,660 people and injured more than five lakh persons in India…. Driver’s fault is the prime reason, The official number of deaths increased in 2010 to 1.3 lakh. The proportion of injuries to deaths remained unchanged at 4:1.Deaths in road accidents in the country are the highest despite the fact that its population is much less than neighbouring China and more vehicles ply on US roads than India.” Said Mr Kapila.

“IRF had written a letter to the Punjab state chief secretary Rakesh Singh in May this year suggesting ways and means to reduce increasing road accidents in the state and meet the target of reducing road fatalities by 50 per cent by the year 2020 a target set by UN General assembly .” said Mr Kapila

“India accounts for about 10 per cent of the total 1.3 million road accident fatalities worldwide, despite having only one per cent of the world’s vehicle population. Estimates of the Planning Commission and the World Bank have put social cost of accidents between 2 to 3 per cent of the GDP every year. The government is losing Rs. 1 lakh crore a year because of road accidents, and this is besides the loss of human life and trauma.. In 2002-03, the Planning Commission reported that road accidents cost the country Rs. 55,000 crore, about 3% of the GDP, that figure has now doubled” said Mr K.K.Kapila, Chairman, International Road Federation (IRF) in his letter.

“As India has accepted UN assembly resolution proclaiming 2011-2020 as Decade of Action for Road safety with a global goal of reducing road deaths by 50 per cent. State Governments have a major role to play in reducing the road accidents. IRF has suggested that State government should set up an apex body-Road Safety Board at state level on the lines of one being set up by Union Ministry of Road Transport and Highways as an act of Parliament.. This will help in collecting vital information of major road accidents, make analysis of accidents, improve road designs and provide emergency care”said Mr Kapila.

“The other suggestions made by IRF to the state government include setting up fully equipped trauma care centres for accident victims in hospitals linked with major highways in the state as proper medical care administered in time to accident victims can save lives. Appropriate road signs providing information about these trauma centres with phone numbers should be put on all highways and major roads. State government should also ensure that any person helping accident victims should not be harassed by police as per Supreme court directions “ said Mr Kapila

On November 1& 2 , 2012 a two day global meet on ‘Road Safety in Urban and Rural Roads’ is being organized by of the India chapter of this Geneva based global Body for promoting and advocating safe road developments. The meet will be held in Delhi. About 1000 eminent road safety transportation experts from more than 30 countries will take part in the meet.