“I am an artist. The track is my canvas, and the car is my brush” is how 25 years old Pradeep Rao Vaidyam describes his passion for Motorsports. An athlete since childhood, Pradeep always had a penchant for sports. While growing up in Mumbai, he decided to pursue his dream of being a racer and had his first face off with racing in 2014 with LGB Formula 4. Although he did not win in 2014, he learnt a lot from his first experience and finally won the Vento Cup junior championship this year. In the following interaction he talks about his love for Motorsport and speaks candidly about his experience in the premier one make racing series – The Vento Cup. 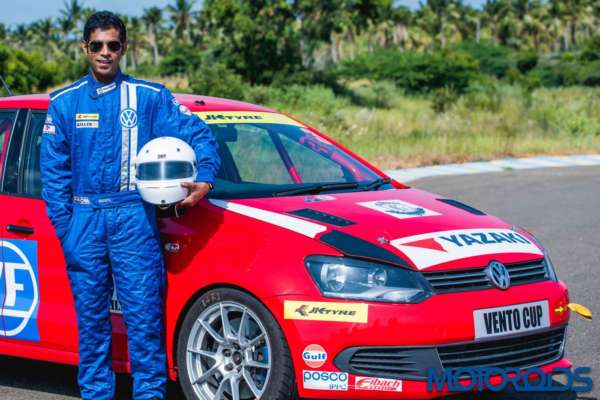 Q- A question that almost every racing driver in India has to answer – Why did you choose racing over any other sport?

A – I was an athlete right from my schooling days and had a liking towards sports. Motorsports for me was something I had always been passionate about. The thrill, the speed, the pressure, the racing atmosphere is something I strongly adored and wanted to be a part of it. To put Motorsports in simple words – “I am an artist. The track is my canvas, and the car is my brush.”

Q- Though Motorsport is quite niche in India, there are still several series that run through the year. What made you decide on Vento Cup?

A – Volkswagen Motorsports is very well known in the industry with a glorious history in every format of racing. Once I was selected in one of their selection process, there was no looking back from for me. I consider myself extremely fortunate to represent Volkswagen Motorsports India in the Vento Cup, a team with passionate bunch of people working relentlessly towards one single goal – cultivate an atmosphere for motorsport in this country.

Q- Apart from driving skills itself, what do you think is a must-have for a racing driver? How does Volkswagen Motorsport programme support you in this?

A – It would definitely be perseverance, there is a lot of uncertainty about the outcome despite giving one’s best and being skilled. You have to make sure your morale is always high and doesn’t suffer due to few setbacks.

One thing that helps you maintain your flow and form is seeing you’re not the only one doing it and that’s where Volkswagen Motorsport India comes in; you even get to see better racers faced with worse results and they still do not give in. Volkswagen Motorsport has been the backbone for my success in lifting the Junior Championship. 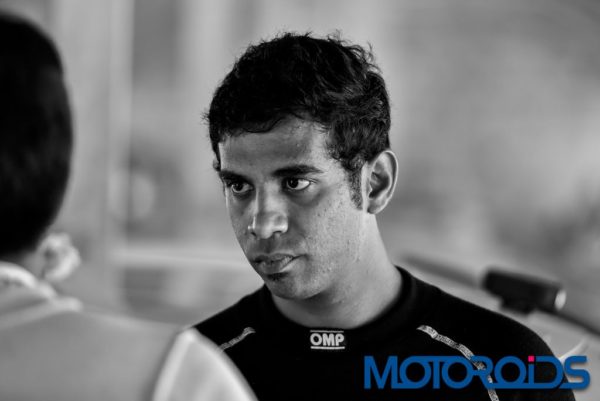 Q- How has your experience been in the one make series and overall in the championship?

A – The season has been very competitive, right from the first round. One make racing series is an exciting and extremely competitive form of racing. Being in a tight competition always gets the best out of you by minimizing your errors on track. The fight for the championship was a nail-biting one as always and went on till the last race of the season. I totally enjoyed the healthy competition seen over the season with my competitors.

Q- Tell us one of your strongest points that helped you win the title and one of the weakest points which you would like to work upon for your future career.

A – My strongest point that helped me win the title has to be consistency. In racing, it isn’t only about being the fastest or the quickest. I’d say, being consistent and focused towards your immediate goal is a very important quality on the grid.

Coming to my weakest point which I desperately want to improve before next season is trying not to crack under pressure. I am working on this weakness and hope to bounce back strongly.

Q- What is that one thing that you think is currently lacking in the Indian Motorsport and is holding it back from producing truly world-class champions?

A – The drivers in the Indian motorsport fraternity are very well trained and have the right attitude; the problem is with the funding and sponsorships. It’s then a lack of awareness among the masses about motorsport which leads to limited recognition for those in the industry. Even if you are aware and want to enter this field, the next challenge that comes your way is getting a good sponsorship. For getting a diverse pool of drivers, motorsport needs to be mainstream and not niche which can be done by having more training programs/institutes and better financial support. If we can get few helping hands I’m sure our country will produce world class drivers. 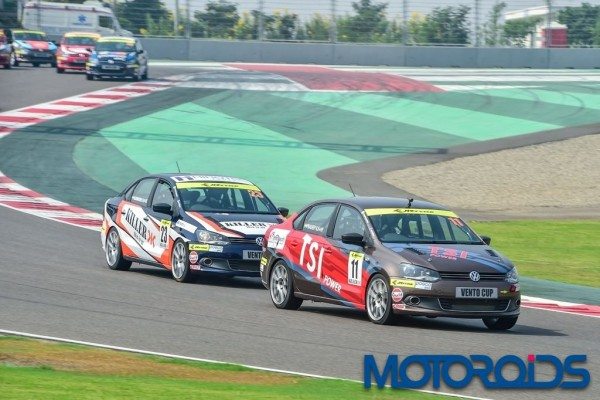 Q- You have raced a little in LGB Formula 4 in 2014, what made you move away from open-wheel race cars to a one-make series?

A – Yes, I had a bit of racing in LGB F4s in the previous season. I always was fond of one make series as it is a perfect way to start a racing career. One gets to learn from the leaders who are the best in class.

Q- Any learning from the Formula 4 that helped you in the Volkswagen Vento Cup?

A – Yes, certainly. I would also take this opportunity to thank my previous team – Rayo Racing – without them winning the championship would be a distant dream. I have learnt quite a lot from F4s, right from handling the pressure during the race weekend to understanding the car and the way it works and trying out new setups is something which has helped me in a big way.

Q- Now that you are the Junior Champion what are your targets for Vento Cup 2016?

A – My targets would be to try and fight hard to win the overall championship next year. I’d like myself to get back to the tracks and put up a fierce fight for the championship.

Q- Unlike Chennai, Coimbatore and Delhi, Mumbai does not seem to have the infrastructure for racing, how did you manage to overcome this challenge?

A – Mumbai does lack good racing infrastructure but if you are really passionate about something you tend to work with whatever is available. Things have changed in Mumbai too, I won’t say as much as Chennai, Coimbatore and Delhi have but for now there are other ways to get into motorsport. I was trying out the local karting arena and happened to see a training session banner with a reputed F4 team. I got in touch with them and they trained me well for the F4.

Q- Tell us about your Motorsport Idols and the part they have played in inspiring you to join the sport.

A – Fernando Alonso and Juan Pablo Montoya are my greatest motorsport idols. I like Fernando Alonso for being consistent. I’d love to have his ability to understand the car well and develop skills which work best with the car.

Juan Pablo Montoya – for being totally ruthless on the tracks and his ability to go for the kill at the right time.

Q- In the long-term, where would we see Pradeep 5 years down the line?

A – I’d love to be in the motorsport Industry through my life. I’m trying very hard to improve my performance so that I can put up a good show for everyone and I also hope to climb the ladder as fast as I can to achieve my aim of being a good racer.