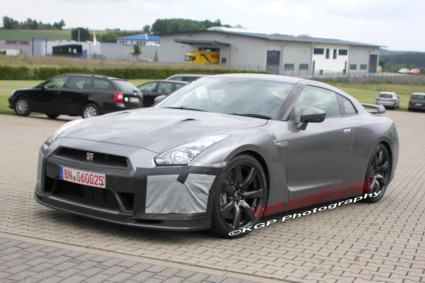 Thanks to the blokes at Autoblog, we have some pics of the car, which can be found in the gallery below

Talking about the design, which has not recieved any drastic change needs a trained eye to differentiate it from the current one. The car gets a new rear bumper with an integrated diffuser. The front gets a redesigned grille and a newer bumper which Nissan guys managed to hide under the camouflage.

Both the standard GT-R and the Spec-V were spotted on the track. Autoblog says the official announcements could be made by fall this year. We can just wait and watch!