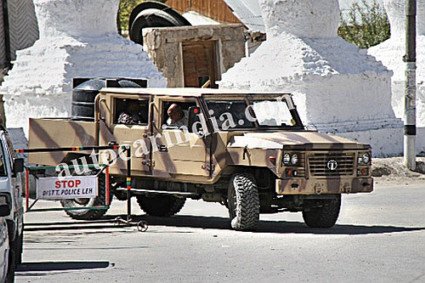 When Mahindra was developing the Axe, the High Mobility Multipurpose Wheeled vehicle for its use in the Defence sector, most of thought that Tata was sitting idle. But they were not. They were busy developing the Light Specialist Vehicle(LSV).

The same vehicle has been supplied to the Army and the Anti Terrorism Squad and with this Tata expands their current portfolio of defence vehicles which includes trucks, Sumos, Safaris and other similar multipurpose vehicles in 6-wheeler and 8-wheeler forms.

LSV has a payload capacity of 1.2 tonnes and it is versatile enough to let the special forces carry more weapons or soldiers depending on the situation. It gets an automatic transmission and has a topspeed of 105kmph. The other specs include a whopping 255mm ground clearance and a 45 degree approach and departure angle. It can withstand temperatures ranging from -20C to 55C.

This promising vehicle has been spotted being used by the defence forces, pics of which can be found in the gallery below. It was showcased at the Defense Expo in 2008. Tata has indeed worked hard on this vehicle.

Mahindra on the other hand is busy getting the Axe readied for the Indian Army. Reports suggest that Mahindra is getting in a JV with some of the gulf based firms too to sell the heavily-armoured Marksman and other armoured cash-transporting vehicles there too.

The soldiers out there who risk their lives in fighting terrorism and insurgency will surely get help from the new vehicles like the LSV and Mahindra’s Axe. We wish Tata brings the LR Defender too.