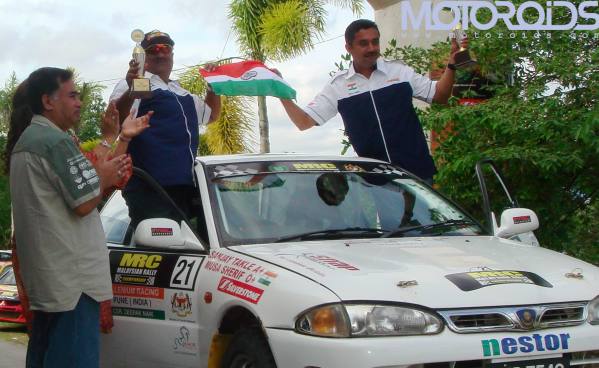 In the fourth and concluding round of the championship run through the Perlis Sugar Plantation in the picturesque State situated to north of Malaysia, the Indians powered by a Proton Sataria finished in second place.
The podium finish helped the Indians pip Malaysia’s Wan Mohd. Hafiz  (co-driver Syed Mohd. Jefri Tuan Ahem) by 5 points. Sanjay-Musa finished with a four-round total of 42 points.

The rally, run over 600 km included 9 stages with 28 hopefuls from Japan, Hong Kong, Indonesia, India and Malaysia fighting for honours in various classes. Unlike the other three rounds, Round-4 in Perlis was slippery which meant any attempt to go flat out was risky. “The black soil made it difficult,” said Sanjay.
After the flag off from Toshi Lake resort, Dataran Terinai, the Indians hit their trail on a go-all-out approach as they trailed in third position. “The aim was to finish higher,” Sanjay added.

The stage however ended the hopes of the second Indian entry of Lohith Urs and Shrikanth (Gr P12), who packed up the turbo of their Mitsubishi Lancer Evo6. The exit of Lohlit-Shrikanth left Sanjay & Co. the lone India hope.

“We decided to cut down the pace with the objective of completing the rally,” explained Sanjay. Stage-4 (Baru to Batu Bertangkup;18.49 km) saw the Indians finish overall sixth. But thereafter with directions to complete all stages without problems meant the Indians go through Stage-7 and 8 cautiously.

To compound matters apart from the slush was the drive through ten feet of sugarcane, which forced the experienced Musa to navigate via GPS and a terratrip meter. The earlier three rounds were through palm plantation.
By Stage-8 (Air Timbul Town) Team India were still unable to go beyond the third position they held. But the stage that followed (Air Timbul to Padang Keramat; 16:41 kms) turned out to be the decider. A fierce drive resulted in Sanjay winning the stage from Jamaluddin by 30 seconds, which pushed them a notch higher in overall class standings.

“The only thing I missed at the MRC was not finishing in top spot in any of the rounds. I’ll be back to fulfill that dream,” Sanjay added
The team is thankful for all the assistance/ sponsorship extended by Cdr. Dipak Naik – Millennium Mobility, Abhimanyu Sable – ABS Fitness, Ramesh Mehta – Dreams Group (Construction Co.), and Garmin Asus and Shreekant Apte – President MASA and Director West Zone (FMSCI).