Home Motorsport Next round of Indian Motorcycle League on Apr 27 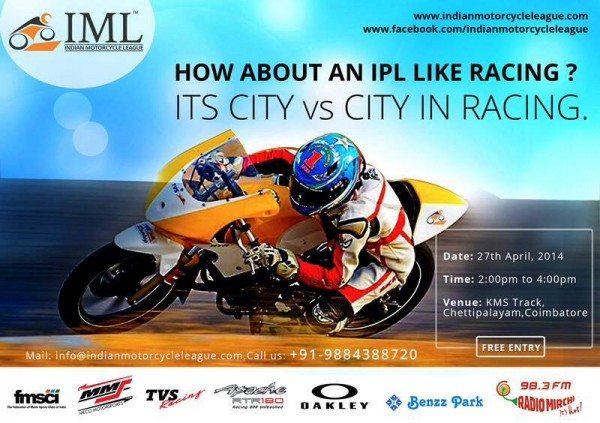 It was back in early January this year, when Indian Motorcycle League, a motorcycle racing championship based on a format similar to that of the IPL, was launched in India.  IML has been launched by K Rajini, Sarath Kumar, K Jagan and Harry Sylvester. Mr. Rasheed Khan is the chairman at Indian Motorcycle League. IML gives Indian motorcyclists a platform to display and hone their riding skills during three rounds of Endurance Racing.

The initial round has already taken place and IML is now gearing up the next round, which will be held on April 27, at Coimbatore. Here is the description of IML, taken from their official Facebook Page-

1. First time in the Indian motorsports with an brand
new format of two wheeler racing.

3. As many as 40 riders are likely to be signed up for the inaugural season.

4. All the riders can only be picked by draw a lot.

6. An action with two bikes per city team.

8. A mandatory rider change after every 25-minute stint will add to the excitement.