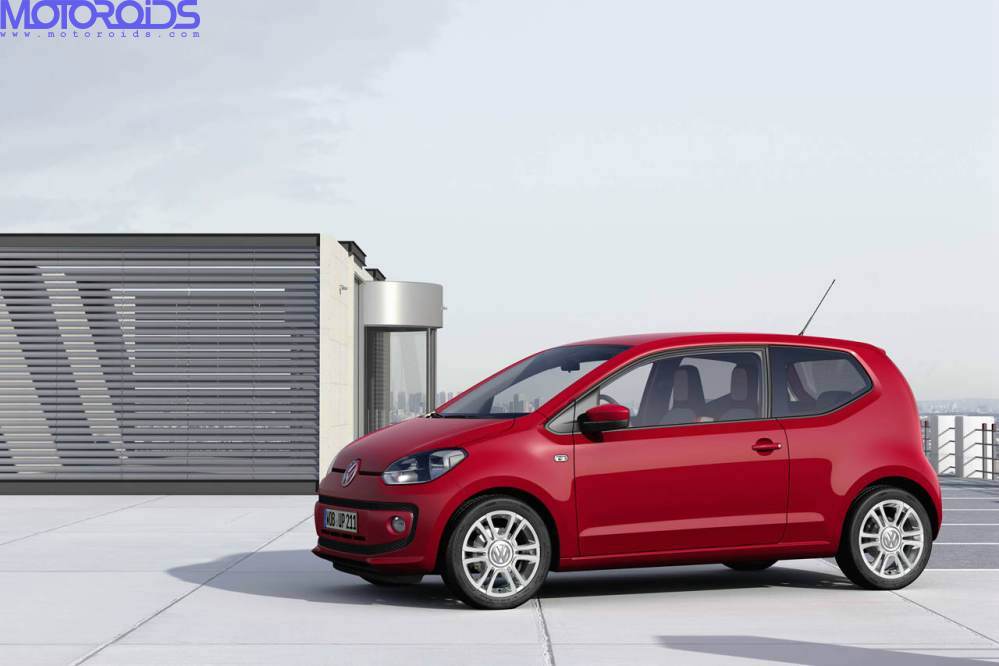 VW revealed their Up! Concept first in 2007 at the Frankfurt Motor Show. Ever since, the whole world has looked towards the German company with great anticipation wondering how the smallest car in the VW family would turn out to be. The days of wait are over now, with VW having released the official pictures and details of the new car.

The production version of the car, as shown in the pictures, stays true to the concept. A tall boy design encapsulating good space within compact dimensions, the Up! looks like an ingeniously designed small car which will deliver in terms of space and comfort even with its small size. Although not too snazzy, the Up! looks handsome and is very well proportioned with clearly defined lines. Thankfully the face of the car isn’t the same of as the rest of the VW family cars, saving us the monotony.

The Up! will also feature a Portable Infotainment gadget which will control many features of the car and can be carried along by you as you move out of it. Optional equipment for maximizing utility will include kits like the kid box, city box and travel box. The car will go on sale in Europe in December 2011 with three trim levels – Take Up!, Move Up! and High Up! with High Up! being the top of the line variant. The black and white cars you see in the pictures are two special variants – Up! Black and Up! White

Engines options would include two variants of VW new 1.0-liter petrol mills producing 59 and 74bhp. No details on the diesel options have been revealed, but for India, the 1.2 liter diesel engine powering the Polo and the Fabia makes logical sense.  A CNG and EV variant of the car is also planned for the future.

Here’s the detailed press release on the car, followed by its pictures .

Wolfsburg, August 2011. Volkswagen has redrawn the map of the small-car world. The goal: to develop a small car with charisma, a small car with maximum space on a minimal footprint, a small car with the most fuel-efficient engines or an electric drive, a small car with intuitive infotainment and operating systems, a small car with the safety of a large car. The result is the new up! It measures a short 3.54 meters and is a specialist for everyday urban living that was thought through to the last detail. This car – like the larger Polo and the even larger Golf – will appeal to people of all ages and mobility wishes.

Affordable for everyone
In launching the up!, Volkswagen is not only putting a new car in motion; it is also redefining the parameters of customization and financing. This means that along with clearly delineated equipment lines on the up!, new features will be offered such as up! boxes – e.g. box sets for shopping, long trips or for children on board. The up! will have an infotainment system that owners can tailor to their personal profiles using apps. And because a small car needs to be affordable, a new financing model known as AutoCredit2 that is exclusively tailored to up! buyers will offer greater financial freedom thanks to its flexible configuration options. And for many people, this will make the goal of driving a safe and economical new car more attainable than ever. Like the Beetle back in the 1950s, one could say that the up! is once again “democratising” car driving.

Launch in December
The up! will first be launched in the European market. It all starts in December. There are three versions for different budgets and needs: take up! is the entry-level car, move up! the comfort oriented one and high up! the top version. Directly at the car’s market launch, there will also be two independent models based on the high up!: the up! black and the up! white. up! offers maximum space and superb functionality over 3,54 x 1,64 meters. up! debuts as first car in its class with City Emergency Braking.
The new up! – a small Volkswagen with great potential

New generation of engines
4.2 l/100 km with petrol engine. Debuting in the up! is a new generation of three-cylinder gasoline engines. Their output is 44 kW/59 hp and 55 kW/74 hp. Combined fuel consumption as a BlueMotion Technology version (including a Stop/Start system): 56 mpg (59) and 55 mpg (74 hp). Both of these 1.0-litre engines emit less than the 100 g/km CO2 limit. A natural gas engine with 50 kW/67 hp with the same basic configuration will follow. Its combined fuel consumption of 73 mpg (natural gas) is equivalent to a CO2 value of 86 g /km; as a BlueMotion Technology version the natural-gas powered up! even attains a low CO2 value of 79 g/km. There are also definite plans for an up! with an electric drive for the year 2013.

First small car with City Emergency Braking
Stops automatically. An important new safety technology system is the optional City Emergency Braking. It is automatically active at speeds under 18 mph, and it uses a laser sensor to detect the risk of an imminent collision. Depending on the vehicle’s speed and the driving situation, City Emergency Braking can reduce accident severity by initiating automatic brake interventions – and possibly even avoid a crash. So far, the up! is the only vehicle in the segment to be offered with an emergency braking function for city driving.

Dimensions and styling for the world’s metropolitan areas
Extremely long wheelbase. With its noted 3.54 meter length and 1.64 meter width, the up! is one of the smallest four-seat cars. The Volkswagen is 1.48 meters tall. Its overall length consists of conspicuously short body overhangs and a very long wheelbase (2.42 meters) – a body layout that fully utilizes the space available in the new design.
Klaus Bischoff, Head of Design for the Volkswagen Brand says: “If the goal is to maximize space, the ideal form for a small car would be a rectangular box. In the up! we were able to sculpt such a box with a clean and powerful design that does not lose sight of space utilization.” The front end of the up! reveals much about the car’s character. Klaus Bischoff: “The face is unmistakably that of a genuine Volkswagen, but with a very independent personality. Naturally, the familiar styling characteristics of our brand face can also be found on the up! – the emphasis of horizontal elements and the connection of the grille and headlights to form a band, the accents created by small angles and the characteristic light signature of the headlights. But more than on any of the other models, the up! definately shows a smile. The up! is simply appealing, and it appeals in a simple way!”

Uncompromisingly good use of interior space
Small giant. Space utilization in the car is exceptionally good, because of its wheelbase – one of the longest in the segment – combined with an engine that is mounted well forward. Although the driver, front passenger and two rear passengers are travelling in a small car, it is byno means a cramped vehicle. On the contrary. Consider the boot: 8.9 cu ft are significantly more than is typical in the vehicle class of the up! When the rear seat is fully folded, cargo space even increases to 33.6 cu ft. These two values show that in its interior the up! will be a giant among small cars.

An interior design that is fun
Lots of interior colour. Essentially, the up! interior has a very clean and well-organised layout. The new Volkswagen also offers numerous clever and detailed solutions, fun styling and a level of quality that will enhance the market segment. Especially high-end is the Dash Pad, an instrument pad extending crosswise in front of the driver and front passenger. Depending on the equipment line, either decor paint or one of the 5 body colours is used in the interior.

up! boxes – small things that make a big difference
The developers of the up! asked themselves whether everyday living with the car could be structured in a simpler and friendlier way. Their answer was a decisive yes, because it is often the small things that make a big difference. And that is how the idea of the up! boxes came about. Small, lightweight boxes for a wide variety of situations and needs. Take the “kid box”, for example, that was designed for parents with small children; it includes a bag for the thousand small items that are essential with small children; and of course a toy to cuddle with and a lunch box for the obligatory snacks. Other up! boxes will be called the “city box” and the “travel box”. And their names are their agendas.

maps + more – the Portable Infotainment Device (PID)
Mobile Information. For the first time in a Volkswagen, the maps + more system is now being offered, a mobile Portable Infotainment Device (PID). In the economically priced up!, this is a system that is equally economical and was developed to organize the navigation, telephone, information and entertainment areas. In cooperation with Navigon, one of the world’s leading suppliers of navigation systems, a special solution was tailored to the up! which is affordable for all buyers –maps + more. The user simply snaps the PID into place above the centre console. Unlike many other similar systems of this type, maps + more melds with the car’s network of systems much better: navigation, telephone and infotainment can now be controlled and viewed via the PID touchscreen, and the touchscreen can also be used to view important vehicle information, such as the visual display of the ParkPilot (controls the car’s distance to the next vehicle). Apps specially developed for the up! also let users extend maps + more to meet their specific needs.