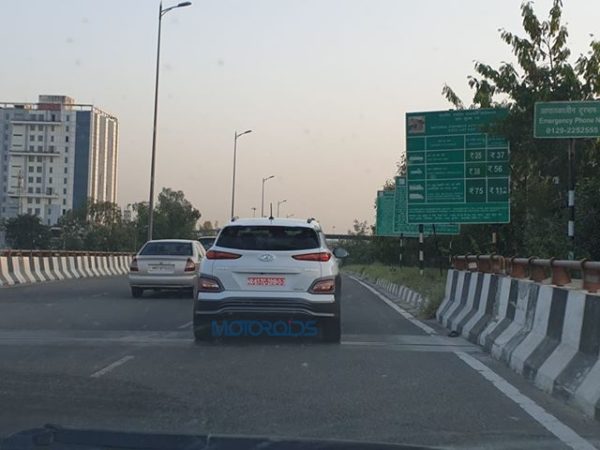 Spotted by our reader and fellow petrol head, Mohit Malik, this SUV was spotted on the open roads of Faridabad in Northern India. The absence of any tailpipe and a badge that reads electric confirm that this is a clean and green machine. The rear looks as if it came straight out of a concept car, while the rear taillights are at a conventional position, the side indicators and reverse light find a rather quirky placing. Looks very different from what we are used to seeing.

The Kona SUV is available internationally with 2 different battery packs and even a normal internal combustion engine. It is very unlikely for Hyundai to introduce the car with a normal engine given that it could hamper the sale of the Creta SUV as well. It is highly likely for us to get the smaller battery pack variant which has a range of about 250 km on a single charge. The two current electric vehicles in the Indian market, the Reva e2o and the eVerito both offer a range of way less than 200 km. Expected to come by 2019, the car is estimated to cost INR 25 Lakh. Here is an image gallery of the Kona SUV showcased earlier at the Auto Expo this year.