Hyundai Motor has released two new videos and the first set of official images of the all-new i20N. The new teasers released had been shot in Sweden where the sportier variant of the i20 was undergoing winter testing. Besides hinting at the upcoming performance hatchback’s capabilities, the videos and images also provide new design details.

In a series of videos, which were shot in Arjeplog, Sweden, the visuals show Hyundai WRC driver Thierry Neuville putting the i20N through its paces in a snowy landscape, along with two other cars – the i20 WRC and the RM19. The first video shows the prototype of the all-new i20N, with a camouflage covering over its front and rear. One gets just partial glimpses of the new model’s details, as it drives across the snow.

It definitely looks familiar since it is based on the standard model of the third-gen Hyundai i20, but a few differentiating elements could be spotted as well. one can expect performance-related design and styling tweaks, such as an updated grille and front bumper that will also house larger intakes for cooling the engine. The larger wheels, thicker tyres and larger front and rear disc brakes are clearly seen, as are the brake calipers that are finished in red. Will the production-spec get these? Only time and Hyundai can tell! One can expect Hyundai to share some details soon.

Coming to the engine, again Hyundai hasn’t revealed anything officially, but as we reported earlier, chances are that the i20n could be powered by a 1.6-litre turbocharged petrol engine that belts out roughly 200 bhp with a peak torque of 250 Nm. For transmission, the automaker is likely to offer a choice between a six-speed manual gearbox and a seven-speed DCT automatic gearbox.

Commenting on the new prototype of all new i20N, Neuville said: “Very interesting car. Very precise. Very easy handling. The engine is revving nicely and the noise is very interesting as well. I’m looking forward to getting this one to drive in WRC!” As some have reported, a rally-spec version of the next-gen i20 might also be in the works. 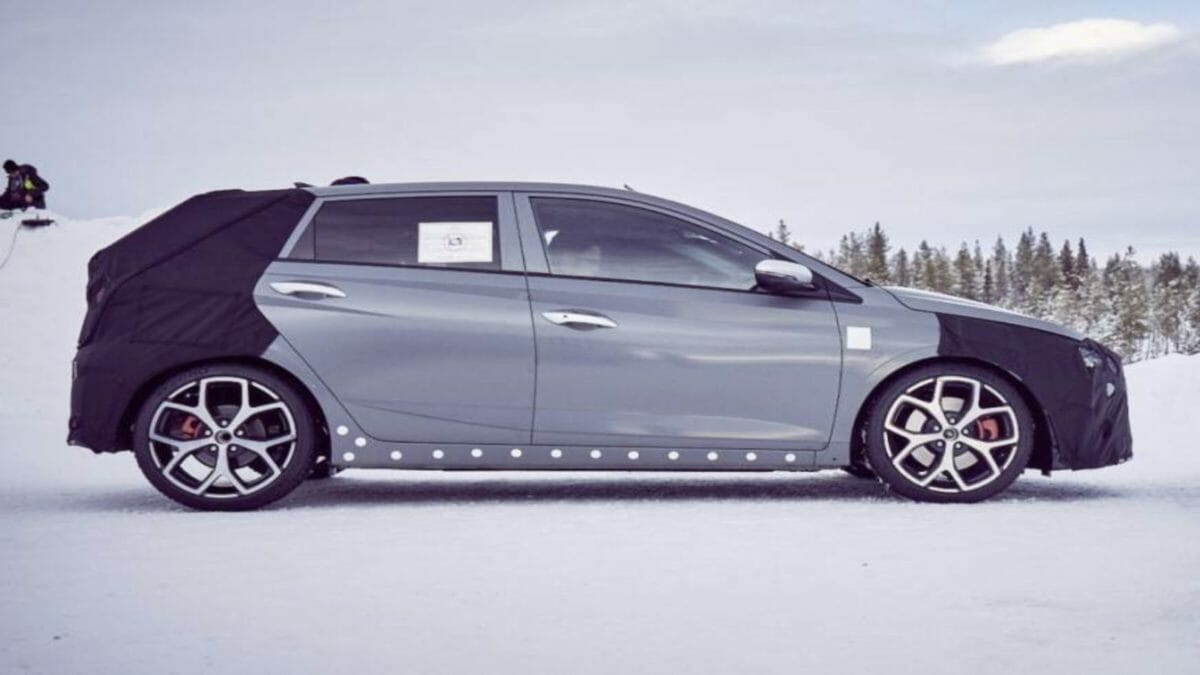 Hyundai is known to tests its cars in harsh climates to make sure its vehicles can still perform in extreme weather conditions. From searing summer heat to icy winter roads, vehicles must be able to function in every climate condition in Europe. As mentioned earlier, the testing was performed on a frozen lake in Arjeplog, Sweden, a popular winter testing ground for automotive manufacturers. The year-round deep cold makes it the perfect place for testing vehicles in extreme weather conditions. Some days, the temperature can drop to minus 30 degrees Celsius.

Is It Coming To India?

Hyundai already has quite a few high-performance driven cars in its international line-up. That list currently includes the Hyundai i30 N, Hyundai i30 Fastback N, and the Hyundai Veloster N. The company will also add the Hyundai Elantra N-Line to the range quite soon. While the Hyundai i20 N is a long shot for India, the standard-spec car is on course for a late 2020 launch. The car has been a household name in the premium hatchback segment for over a decade now. Much like its predecessor, the new generation Hyundai i20 will compete against the likes of the Maruti Suzuki Baleno, Tata Altroz, Toyota Glanza, and the Honda Jazz.