The Ford EcoSport is easily among the most successful vehicles of present times. The Ford EcoSport compact SUV isn’t not just proving to be ultra beneficial for its sellers but has also sent makers of rivalling cars back to the drawing boards. With many new/facelifted Compact SUVs lined up for launch in near future, this segment is looking poised to heat up to a great level.

One of the manufacturer that is ready to jump into the Compact SUV bandwagon is Korean auto giant Hyundai, which is busy with the development of a new vehicle that will be a direct rival to the EcoSport. 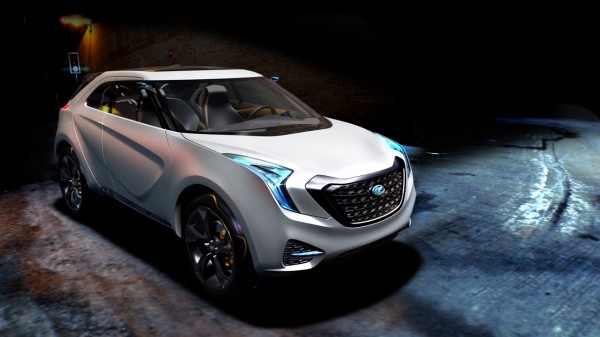 Seen appended here is a spyshots of the upcoming Hyundai EcoSport rival. The upcoming Hyundai compact crossover could borrow quite a few design cues from the Hyundai CURB Concept which was unveiled at the 2011 Detroit Auto Show. The car might also sport some design cues that were seen on the Kia Provo concept.

Nothing much is known about the engine options for this car but we do expect that the Korean manufacturer would offer its new range of compact petrol and diesel engines. One of these motors could be the new 1.0-liter turbo petrol engine details of which Hyundai unveiled last year. This engine could snatch some limelight away from the much hyped Ford EcoBoost engine.

Hyundai’s EcoSport challenger is expected to make its debut sometime late next year and it is pretty much for sure that the car is headed our way. Stay tuned to Motoroids for more on the upcoming Hyundai mini SUV.