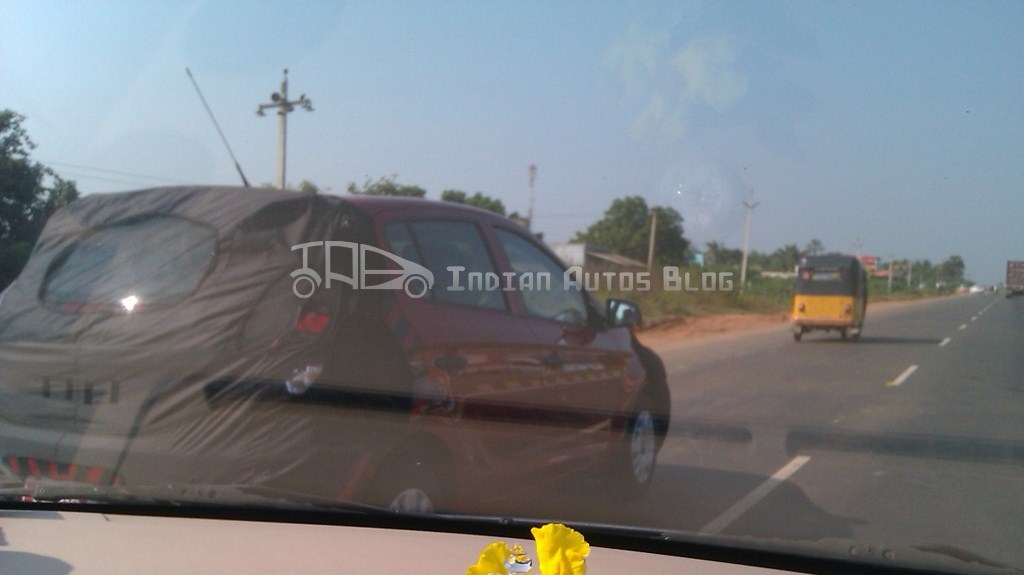 If you will remember, we talked about the i20 facelift renderings surfacing all over the internet. Recently, our friends at indianautosblog.com  caught a heavily masked i20 on test duty at Sriperumbudur, near Hyundai’s manufacturing facility.

We have always liked the way Hyundai i20 looks. The car is distinctively European in appearance with a pleasant and inoffensive styling. The looks make a clear departure from the styling seen on Hyundais of yore. The bonnet has some surfacing inspired from the popular SLS McLaren and this has to be the best feature of the design for us. Eagle eyed readers will notice that the wheel caps are the ones we first saw on the European test mules of the facelifted car. Talking about the rear and this is where many of the changes are to take place in the refreshed i20, the car reminds of Puegeot and somewhat of the Seat cars and this has to be a good thing.

Maruti Suzuki India Limited, India’s leading car manufacrurer, recently launched the all new generation of Swift hatchback and we also saw Honda getting aggressive with the pricing of it’s premium hatchback, the Jazz. This all is known to have made some impact on sales of the Hyundai’s offering in the segment and to counter it, Hyundai immediately needs to give some botox treatment to it’s high selling hatchback. We expect the refreshed i20 to embrace the recently acquired fluidic design language of Hyundai.

Also, it is perfect time for Hyundai to do some performance upgrades to introduce with the facelift. It may be noted that the 6 speed transmission on the diesel version of the car was recently axed as Hyundai felt that it was eating into sales of it’s elder sibling, the Verna. We will not really call this an upgrade and would like to see it back on duty in the refreshed i20. And when at it, we would also want our i20 to out-handle the competition. Ah! If wishes were horses…

Anyway, expect the refreshed i20 to greet you at the Hyundai pavilion at the 2012 Delhi Auto Expo. Stay tuned.