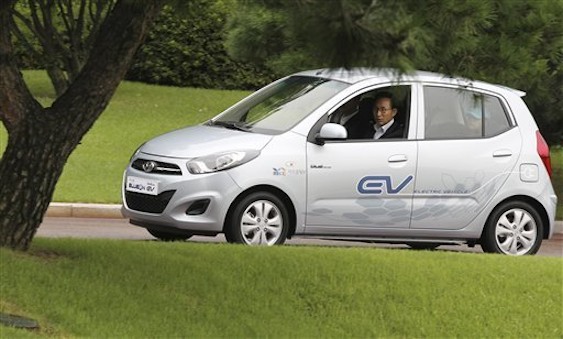 Hyundai Motor Co. unveiled its first Full Speed Electric Vehicle (FSEV) named ‘BlueOn’ in Korea, which is based on the 2011 Hyundai i10 small hatchback. The BlueOn concept car was first displayed at the Auto Show held in New Delhi in January, 2010.

The BlueOn is powered by a 16.4 kWh LiPoly (lithium-ion polymer) battery pack and an electric motor that produces 80 hp and 155 Nm of torque; allowing the BlueOn to run to the 100 km/hr mark in 13.1 seconds with a top speed of 130 kms. On a full charge, the Hyundai BlueOn can travel 140 kms and the batteries take about 6 hours under a traditional household outlet but a quick charge method allows the battery to be recharged to about 80 percent within 25 minutes.

Hyundai will provide 30 BlueOn vehicles as test fleets to various government organizations in Korea by October. This test-fleet will be used mainly for development and testing the charging infrastructure for about two years until August, 2012. Hyundai then plans to expand its production capability for BlueOn next year, carrying out test productions and making about 2,500 units by the end of 2012. We are assuming the BlueOn to make its debut in India in 2013.