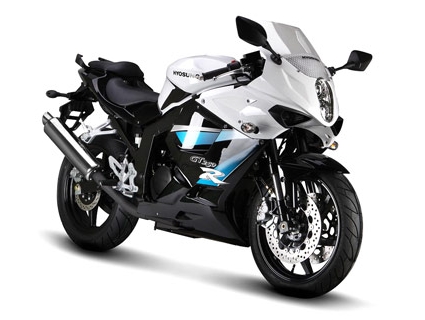 About a week before the Ninja 250R launched in India last, we told you that the Hyosung were mulling a comeback to the Indian market. Now some publications who were lucky enough to get their hands on the Hyosungs have confirmed that the Korean brand will begin selling its wares by November this year. The bike maker will start off by introducing two vehicles – the GT650R sports bike and the ST7 cruiser. Both these bikes are powered by the same 650cc, 82 PS V-Twin engine.This strategy from Hyosung is somewhat similar to their earlier debut in the country when they launched the Comet GT250 street bike and the Aquila 250 cruiser – both using a similar 250cc V-twin power plant.

If the market response is good, Hyosung could bring back the Comet GT250 and GT250R as well

The GT650R and the ST7 are expected to be priced in the 3.5-4.25-lakh rupee bracket which, given the specs of the two vehicles, is a very competitive price tag. Currently the Kawasaki Ninja 250R, which resides on a 3-lakh rupee sticker price, is the only player in this segment and the arrival of the Hyosungs should heat up the game soon. We already have reports of Kawasaki Motor India gearing up for the launch of the Ninja 650R this year end. At a speculated price tag of Rs. 5-lakh, the Ninja 650R could turn out to be a dart in Hyosung’s arm. The ST7 however should pass off without much competition since the next cheapest cruiser comes in the form of the Harley Davidson Sportster at the 10-lakh rupee price tag.

Given Hyosung’s past history, we are not quite sure how the market would respond to their vehicles. Though their 250cc motorcycles were sold out almost instantly, the lack of spares thereon left a bad aftertaste with the customers. This time around, Hyosung seems to be more aggressive with their India plans, but whether they bloom well is something that only time will tell. Though the market is tight lipped about the two bikes and Hyosung’s partners, there is a word floating around that points towards a probable JV with Garware Industries Ltd. Stay tuned to Motoroids as we bring you more info…