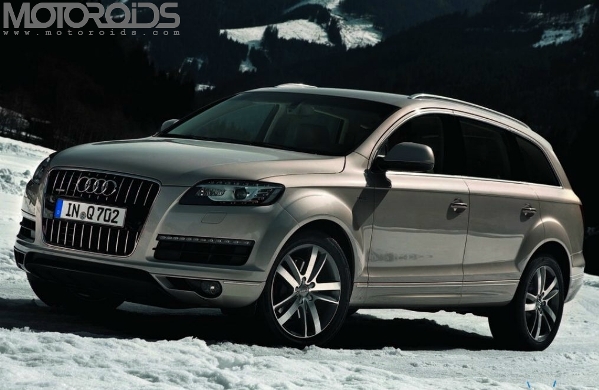 Audi India has launched a new, upgraded version of its hugely successful behemoth SUV – the Q7 in India. The new version of this giant machine will now do away with the 3.6-litre V6 and 4.2-litre petrol engine options, both of which will now be replaced with a 3.0-litre super charged TFSI V6 mill producing close to 280 horses. Apart from replacing the two petrol units entirely with a brand new motors, the German auto giant has also updated the 3.0-litre diesel engine. The new engine is far superior to its predecessor and produces 240bhp of power and 550Nm of train-like torque. The new unit is 20Kg lighter, and claimed to be 19% more fuel efficient than the previous version.
However, if 550Nm torque doesn’t sound monumental enough to you, Audi has another extreme animal for you. The 4.2 liter V8 diesel, which produces an earth shattering torque of 800Nm and an equally crazy peak power of 340bhp.