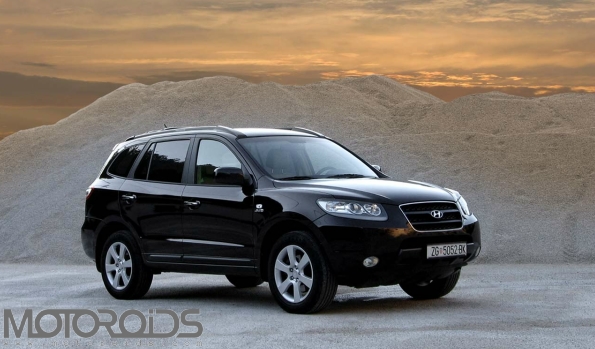 Santa Fe may not exactly be the most modern product in Hyundai’s product, but it’s still considered one of the best SUVs produced by the company. Although the product has been around for quite some time and looks rather old for this time age, Hyundai Motor India, for some keen reason have decided to bring the machine to India. Come Diwali, and you would have another SUV added to the burgeoning list of this brawny class of cars.

The Santa Fe is somewhere between the CR-V and the Fortuner in terms of size. At 4.66 meter long, it’s reasonably big and commands attention easily, although the lines are on the ‘softer’ side, unlike some of the other burly beasts in the market. The Santa Fe has a wide front, with a grille reminiscent of the Hyundai Verna. The narrow headlamps are horizontally positioned and overall lend a likeable look to the front, if not very ‘today’. The rear too, with the narrow horizontally placed tail lamps carries over the design theme from the front. Overall, the Santa Fe appears to be more of a soft roader than the hardcore mud-plugger. The Santa Fe, unlike some other SUVs in this segment is a seven seater, although the third row can only accommodate kids and mothers-in-law / gf’s dad.

Under the Bonnet, Santa has gift for you in the form of a very potent 2.2-litre common rail diesel that’s good for 194 bhp@3800 rpm and an impressive 420Nm of torque. The good thing is that all that twisting force is produced between a lowly rpm band of 1800 and 2500 rpm. The engine is mated to a six-speed manual transmission.

Feature list on the Santa Fe is quite impressive too. The SUV comes equipped with goodies like a twin-zone climate control, a decent sounding audio system with Aux and USB-in ports, steering wheel mounted stereo controls and cruise control. The Santa Fe is very well equipped when it comes to safety. Apart from ESP and ABS, there are as many as ten airbags in the cabin, and all of it comes as standard, making the Santa Fe one of the most well-equipped SUVs as regards safety.

Can the Santa Fe be any good off the road? Well, looking at the specs, it seems it should do reasonably well during your occasional trips off the tar. This Hyundai will come equipped with an all-wheel drive that distributes torque to all four wheels as soon as it sense loss of grip. Apart from this intelligent system, there is also a four-wheel drive lock mode, to engage permanent four wheel drive.

Since the new car is going to be a CBU, we are expecting a rather steep price tag for the car. If we are right in our assessment, the Santa Fe should retail for somewhere around Rs 25 lakh in the Indian market. To expect a rather old Hyundai to sell for that price is asking for a little too much, if you ask us, especially in the company of the likes of the Endeavour, Fortuner and Captiva. We wish Santa all the best though.