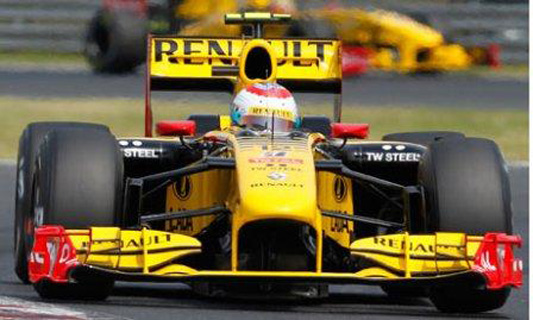 The Hungarian Grand Prix, last race before the summer break surely delivered a huge dose of entertainment. In what would have been a rather uninteresting race, lap 15 turned things around. Debris from the front wing of Force India’s Liuzzi prompted the FIA to dispatch of the Safety Car. There was a mad rush in the pit-lane as almost all cars came in for a change of rubber behind the Safety Car.

Renault made a mess of things as they launched Robert Kubica right into the path of oncoming Adrian Sutil; putting both of them out of the race. I am sure both the drivers must be ruing a lost points-scoring opportunity, with both of them almost certain to score some healthy points; especially given Nico Rosberg’s pit-lane mishap and a weird choice of strategy for the Williams man, Rubens Barrichello. However, Renault were ultimately fined 50,000 USD for their unsafe release of Kubica.

Russian Rookie Vitaly Petrov, on the other hand enjoyed somewhat of a dream run. Starting in 6th place, he made up one spot over Hamilton at the start of the race. Two laps later, he had to hand his 5th place back to Lewis as he struggled for grip at the exit of Turn 1. He then drove a perfect race, pacing himself well against his competition. It was a difficult time for him post pit-stop, where he was stuck behind the slower Williams of Rubens Barrichello and came under increasing pressure from the Williams of Nico Hulkenberg. But keeping his aggression in check, he went on to prove a case in point.

Having been the faster of both Renaults almost all weekend, 5th place was a sweet reward for the Russian rookie. His first finish ahead of vastly experienced team mate Robert will surely soar his confidence levels; especially given the increasing pressure he has come under.

I hope that he continues with this performance and hope that this sterling drive has not gone unnoticed by the people that matter at Renault. This young talent needs time to nurture; I personally think he has been one of the most exciting talents that has come to the fore since Sebastian Vettel.