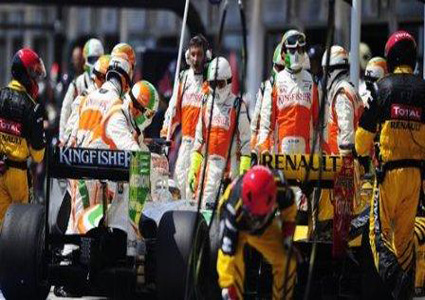 Saturday’s qualifying saw Russian rookie Vitaly Petrov out qualify his Polish team-mate Robert Kubica for the first time this season. The Renault drivers successfully managed to get through to Q3 and register top 10 starting positions on the grid.

At the race start, Petrov gained a position on Lewis Hamilton only to lose it back after a few laps. However, Petrov showed some gutsy driving to hold off challenges from Nico Rosberg. Robert Kubica too held his position till the Safety Car joined the on-track action.

During the Safety Car period, the Renault drivers made successful pitstops, but Robert Kubica in particular was at the receiving end of an unsafe and probably an over ambitious release by Renault’s lollipop guy!

The pit lane was busier than the track due to the Safety Car period and Force India F1 team’s Adrian Sutil headed down the pitlane and to his pit box for his pitstop. In an attempt to not delay Robert’s release, the lollipop man gave his ‘go’ signal to Kubica a little too soon. As a result, Kubica rammed into the side of the arriving Force India F1 car of Adrian Sutil causing considerable damage.

While Kubica continued on track with the damage, he had to retire later due to a damaged suspension. However, Renault were fined on two counts: first was a drive through penalty for Robert Kubica followed by a post-race fine of $50,000 for the team.

The pit lane incidents over-shadowed Petrov’s brilliant drive to 5th place. His career best finish and can be labeled as the ‘best of the rest’ after the Red Bulls and the Ferraris.