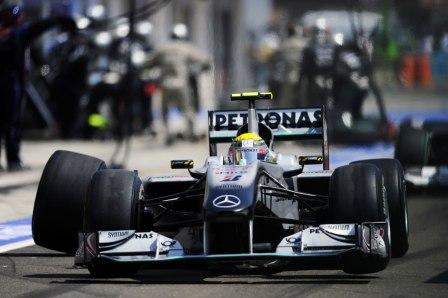 2009 will be a year that Ross Brawn and his Brawn GP team will never forget. However, 2010 is increasingly becoming a year that they will!

Budgetary constraints or not, their car isn’t the best on the grid this season, though their drivers are world class. Nico Rosberg and Michael Schumacher surely expected more from the team when they signed their contracts to race this year.

They started off 2010 just marginally off the pace at the top, but half way through the season and the Mercedes GP car seems to be atleast 1.5 secs off Red Bull’s pace. With a deficit that huge, it is only unfair to expect your drivers to perform miracles on track everytime.

However, in the Hungarian Grand Prix, the team had 2 disasters! First was their fumbled pit stop which led to massive chaos in the pit lane followed by Michael Schumacher’s unsafe blocking off Rubens Barrichello that led to a 10 place grid penalty.

Two penalties in a weekend are surely not what the team expected in their return flight from Hungary.  Their fumbled pitstop not only led to Nico Rosberg’s premature retirement, but also saw the Stewards slap a $50,000 fine on the team.

Financials aside, a free-wheeling F1 tyre is a potential hazard and engineers and mechanics from the BMW Sauber, Renault and WilliamsF1 team were fortunate that no one was hurt. The Formula1 pit lane is known to be one of the most dangerous places in the world to be and the pit chaos in Hungary today pretty much proved that.